Here Are Africa's Top 10 Countries Which Owe China, See The Position of Kenya

China is an economic giant country situated in Asia.The super power nation with a population of over one billion people has in the past few years made several advances in undertaking various multibillion projects across Africa. Most of these projects were accomplished as part of a loan deal struck between the African countries and China.

According to an article recently published by Nairobi News , African nations owe China alot of money. Here are top 10 most indebted countries.

1.Angola - it is the most indebted country with an estimated debt of Kenya shillings 2.5 trillion.

3. Kenya appears on the third position with an estimated debt of 800 billion shillings. Most of these loans were acquired to finance development projects like the Standard Gauged Railway (SGR). 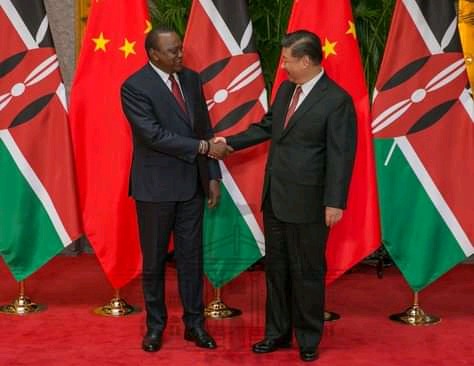 President Uhuru Kenyatta and China's President Xi Jinping at a past event ( photo ).

4.Congo . This central African country comes fourth with a total of about 750 billion Kenya shillings.

5. Sudan . This country on the Northern side of Africa features on the fifth position with an approximated debt of over 640 billion Kenya shillings.

6. Zambia . This country acquired loans to finance several projects majorly in the transport sector. It has got a debt of 650 billion Kenya shillings.

7. Cameroon. The west African country owes China a bill worth 550 billion Kenya shillings. This places her on the 7th position of the most owed countries .

8. Nigeria. This West African country falls on the 8th position from its debt of 480 billion Kenya shillings.

10.Democratic Republic of Congo. The country falls on the 10th position from its debt of 340 billion Kenya shillings.

What are your thoughts on this ? Share your comments.