Central Bank auctions over $10m in a week amid worsening inflation

The Bank of South Sudan has auctioned at least $13 million to Forex Bureaus and commercial banks in one week, as the local currency continues to depreciate against the US dollar.

According to the daily exchange rate update by the Bank, one US dollar sells at 598.4 South Sudanese pounds on Friday, while on Thursday, it sold at 585.8 SSP, a figure that is up from the 573 SSP as of Tuesday.

Makur Deng told the press in Juba, the government is determined to fight back the economic downturns by continuously auctioning the dollar currency until the exchange goes back to normal.

“We are ready even to increase it further to 20 million dollars a week to make sure that the dollar must come down,” Makur said in June.

The measure came amid a spontaneous depreciation of South Sudanese pounds against the US dollars due to a number of factors such as the current global economic crisis.

The inflation, which started in June has also resulted in rising commodity prices in the markets.

A statement of the Bank blamed the depreciation of pounds to suspension of loans by IMF and World Bank, speculations by market dealers and high demand of forex to meet high cost of import.

However, economists have criticized the auctioning of the hard currencies to the commercials banks as making economy more unstable. 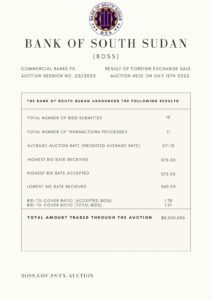