Is it right for Herdsmen to carry AK47 around?

Beef is one of the major consumables in Nigeria. Many Nigerians delight in eating beef in several forms, to some; they prefer to eat it with meal, some like it as kebab (stake meat)while some like to grill it and make awesome snacks from it. However, whichever way it is consumed, beef is a common meat eaten all across the country which is majorly gotten form northeast Nigeria. Long before herdsmen started attacking farm owners and burning down houses in the northeast Nigeria, herdsmen were known to be very peaceful people who lead a simple life. They had virtually nothing except the scepter they used in controlling their herds, they trek long distances just to feed their cows and water them and they were happy doing that.

However, some time ago, the narratives changed when the cows being taken around by these herders started destroying farm produce by hardworking farmers who have put so much effortinto planting their crops who only wake up one morning to meet a totally ravaged farm land and a destroyed means of livelihood.

These helpless farmers started defending themselves when they started attacking the herders themselves after they had called on governments both at the state and at the federal level to come to their aid but nothing seem to be forthcoming from their several calls. Meanwhile, in response however, the herdsmen also took a protective measure in fighting back by killing farmers and setting their houses and farms on fire.

The fight between farmers and herdsmen took a different turn when it gradually became a thing of national interest and it seemed like it is a fight for something different altogether as many farmers lost their lives and properties to herdsmen activities while local villagers could not stand the weapons in the hands of herdsmen with their local machetes. Many well meaning Nigerians have asked questions about where the herdsmen are getting the guns they carry around to secure their cows, a lot have been said about the AK47s that flooded the Nigerian gun market and became a common sight with virtually every herdsman on the streets of a state in northeast Nigeria instead of the usual scepter and sticks used in control of their herds.

The source of the AK47s being carried around by herdsmen has remain a jigsaw puzzle to many as no one can authoritatively establish which market the guns are gotten from. However, since there have not been recent attacks on local farmers and communities by the herdsmen no one is saying anything about the public display of possession of guns without proper licensesto carry such.

The silence of the federal government on this communal anomaly is not at best encouraging but capable of encouraging the influx of a similar trend which may now establish a viable black market that will circulate guns in the wrong hands in the nation. 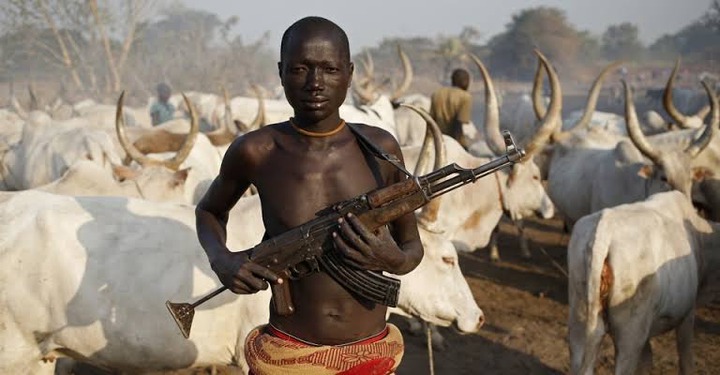 There is an urgent need to investigate where the guns are coming from and there is a need to regulate those who are in possession of guns and issue the necessary documents backing them for having guns in their passion.

Shall we continue to be quiet when herdsmen brandish weapons in public places just to scare farmers away from their farms?Does the government still issue license for the possession of guns? How does the kidnappers get their guns, how does louts get guns during election campaigns?

These questions among others have defied reasonable answers.Please share your opinion on this.