Arsenal were narrowly beaten 1-0 by Manchester City in their Premier League game at the Etihad Stadium on Saturday evening, with Bukayo Saka dazzling to draw encomiums from two former stars of the game. 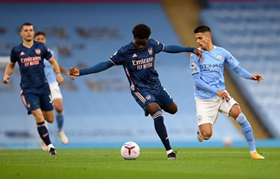 The only goal of the game came 23 minutes in when Sergio Aguero ran through the middle to slid in Phil Foden who cut inside past Hector Bellerin to shoot.

While Bernd Leno spilled it, Raheem Sterling was on hand to slot home the follow-up.

Shortly after the setback for the visitors, Saka nearly got the Gunners on level terms when he got past Joao Cancelo and stung the palms of Ederson with a high shot from a tight angle.

The Anglo-Nigerian winger missed yet another glorious chance when he got in behind the City defence after a one-two with Pierre Emerick-Aubameyang four minutes to half-time but saw his effort come off the shoulder of the opposing goalkeeper and narrowly over the bar.

Speaking during the half time analysis on Premier League Productions , ex-Arsenal captain Tony Adams admitted his combination with Aubameyang was a lovely one, but it didn't materialize to a goal thanks to the great save from the Brazilian.

"It was a great one-two and if it's on his left foot that was a goal but the goalkeeper has done fantastically well. He stood up, off his shoulder. Great, great save," Adams said of Saka's effort.

Former Manchester United player, Owen Hargreaves also felt the youngster had a great game and was the best Arsenal player in the first half.

"He's a fabulous player - Saka. He makes so many things happen. Even if they were second-best Arsenal they had two big opportunities in that half", Owen added.

Arsenal are sixth in the provisional standings despite the loss, having won three of their opening five games.

Talking about saves, this guy is second after God

How's That Not A Red Card? See What Arsenal's Partey Did That Made Him To Receive Just A Yellow Card

"Best In The League," See What this Leeds United Striker Did That is Making Fans To Praise Him.

Ole vs Lampard: See How Manchester UTD And Chelsea could Possibly lineup

Lacazette's display against Rapid Vienna will have given Arteta real concern