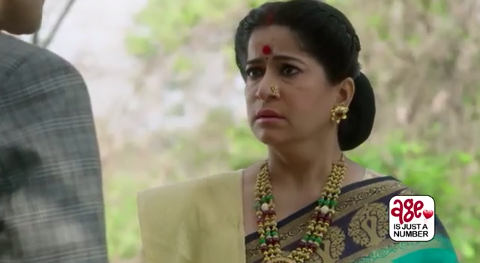 View pictures in App save up to 80% data. On Age is Just a Number Saturday 18 July 2020, Vaidika speaks to Sahil why Shruti feels so afraid. Sahil says Bari Amma just slapped Shruti, her marriage has been preponed. She seems fearful and it's normal. Vaidika was worried what if something happens to Shruti again. Vaidika asks Sahil what if something bad happens to her again. Sahil says he doesn't want something wrong happen to her again, else she will have to bear it after marriage. She told him she likes Prerit and wants to marry him; he needs to trust her this much. He requests Vaidika not to create any hurdle. Vaidika says she also wants the same, Shruti will marry but the right man.

The girl tells Karan she was Prerit's girlfriend for the last two years, he teased her so much. He is a true bastard and must be in jail. He will spoil the life of any girl he lives with. Karan.calls Vaidika to inform her. Anjana was applying henna on Shruti's.hand and curses her brought up. She says she wanted to do a lot on her wedding, but didn't know this all would happen in such urgency. Shruti requests Anjana to requests some time from Bari Amma. Anjana was irked and says Shruti herself agreed to this marriage. She leaves the room. Sahil comes there, Shruti tries to speak to him but recalls Puneesh's black mailing call. She couldn't speak to Sahil.

Karan and Vaidika come to the girl, Fatima's house so that Vaidika can also meet her. An old lady appears and denies any Fatima live there. Fatima had been tied to a chair inside. In Ishq SubhanAllah, Zara returns home where everyone including Kabeer were concerned about the bruise over Zara's neck. Kabeer questions if it was because of the ladies who want to pray in the mosque?

Puneesh had held Fatima hostage. He says no matter what Vaidika does, Prerit will surely marry Shruti. He will become the groom and he will celebrate the wedding night with Shruti each night. He pays the old lady a bundle of money to take care of Fatima till tomorrow. At Agarwal house, haldi ritual was Shruti took place. Nidhi thinks soon Shruti will become Mrs. Puneesh Tiwari 2. Shruti stands up at once and faints in the midst. They take her to the room. Sahil was with Shruti in the room when Vaidika comes to the room concerned and rubs her hand. Sahil watch her there. All at once, there was a message at shruti's phone. It was Puneesh, texting Shaadi Mubarik. Vaidika wonders why he sent message to Shruti.

Nidhi heard this from outside. Vaidika asks how Puneesh knows Shruti is marrying. Nidhi was happy she deleted the old messages of Puneesh from Shruti's phone and calls Puneesh that he must be thankful to her for the favors. There, Puneesh had scattered his photos with Shruti on his bed and thinks he will not let the fish slip from his net. Shruti's life has to ruin, Shruti must marry Prerit no matter Vaidika's life has to be sacrificed for the purpose.

Vaidika convince Sahil that her gut feeling says there is something wrong in the wedding. Sahil says he trusts her that she can never think wrong for her family, but they have no proof and need to find it. Vaidika was worried that Baraat will be here in half an hour. At Agarwal house, Bari Amma asks Deepak about Sahil. She questions Gauri why they brought Shruti downstairs so early.

Puneesh comes inside and asks if they want to know about the truth, they will know about it right away. Everyone insults him to get away, Puneesh drags Prerit inside into Bari Amma's feet and says he was sinful, he had illegitimate relations with Shruti and also disrespected his wife. But he vowed not to let any disgrace to Bari Amma. Prerit was about to run away from wedding. Prerit accepts that after he knew about Shrut's affair with Puneesh he backed out, but Puneesh explained to him that Shruti was young and it was only Puneesh's mistake. Puneesh says he wants Shruti to marry Prerit so that he might pay off a little from his sins. He doesn't want shruti's life be ruined. There, Vaidika sense that Prerit would vanish after marrying Shruti and Puneesh Would play wit, they understand Shruti was being blackmailed with the photos they had found in the room. Vaidika and Sahil know the true face of Puneesh and Prerit. They hurry to share the truth to family.

Puneesh joins his hands that he never wants this to happen to Shruti. Prachi was ready to lend another chance to Puneesh, Anjana says today Puneesh has kept the respect of her family. They should get another chance. Bari Amma was ready to give another chance to Puneesh, but warns that for another mistake she will kill him. Puneesh gets to Bari Amma's feet and promises that they won't get another chance of complain. Puneesh takes Shruti and Prerit to Mandap. Karan thinks something is wrong, Sahil must get a proof as soon as possible. Nidhi calls her men to stop Sahil and Vaidika from reaching the wedding Vaidika tries Gauri's number but she didn't take the call. She tells Sahil to hurry up. She was afraid what if the wedding has completed before they arrive at the wedding.

Gauri stands beside Puneesh but Deepak comes to stand in between them. Anjana does the Gadh-bandhan of Shruti and Prerit. Nidhi's men had planted nails on the road. The types of Sahil's car went inflated. Vaidika and Sahil come out of the car. They stood in the middle of the road helpless. Nidhi's man inform her that he stopped them on the way, they won't be able to reach. Vaidika takes the proof from the car and they leave by foot.

Shruti was asked to stand for pheras. Gauri comes to help her. Sahil and Vaidika run by foot. Vaidika was badly panting, the proofs fell off her hand. Shruti was being instructed to lead the wedding pheras. Puneesh devilishly smirked. Before the wedding could end, Sahil enters the Mandap and grabs Prerit's collar. Bari Amma says interrupting wedding vows is a bad omen. Sahil says this wedding would be a bad omen and beats Prerit badly.

Before Puneesh could interfere, Sahil beats Puneesh as well. The family holds Sahil behind. Sahil grabs the proof from Vaidika's hand and shows them the photos Puneesh used to black mail Shruti, so that she keeps her mouth shut. He says this Prerit had planned to leave the country after marrying Shruti. Prerit says he did everything to go abroad, this was all Puneesh's planning. Vaidika says she has always blamed Puneesh, the one who betrays once can do it again as well. Bari Amma now slaps Puneesh and tells Sahil to send him to jail and spend any amount of money to keep him inside. Shruti cried baldy. Anjana wonders who would now marry her daughter. The women in marriage gossiped against Shruti's character. Vaidika was hurt by the comments they were passing. The ladies tried to make a video of Shruti to spread her truth. Vaidika stops them saying Puneesh is twenty years older than her, men like him use girls to satiate their greed. But there are men in this world who would be ready to hold her hand. The ladies question if there is someone like that? Vaidika looks towards Karan and suggests Karan's name. She says he is an able man, he respects girls and respects them. He knew about Puneesh and Shruti, still he didn't blame Shruti. He instead came to tell her about the truth of Prerit. A lady in the event says there is a difference between words and actions, she must ask Karan if he would marry Shruti. Vaidika comes to ask Karan directly.

Karan looks towards Nidhi who stared in a state of shock. He goes to speak to his family. In the room, Karan was shocked to hear Nidhi that she suggested him to marry Shruti. He says he is already guilty to cheat his friend, she is bearing his child and here she wants him to marry Shruti. Nidhi says she already clarified to him that she will kill the child if he discloses it to anyone. Nidhi leaves the room but Vaidika comes in and slaps Karan. She asks how he can do this to his friend's wife, everyone blamed Sahil.

She also blamed Sahil. She turns to go and tell Sahil about it. Karan requests Vaidika not to do this, Nidhi has warned that she would abort the child otherwise. Vaidika asks if he loves Nidhi. Karan replies no, he never did. She asks about Shruti. Karan says he can marry Shruti to save her life. Vaidika says she will still tell Sahil about it but not at home. She sends Karan down to marry Shruti..Karan leaves. Vaidika cries that Sahil explained his position repeatedly but she didn't trust him. She is sorry.

Downstairs, Karan announces he is ready to marry Shruti. Sahil arrives there and cheerfuly hugs Karan. He recalls Karan had called him while Sahil had been driving. Sahil had hurried home in excitement. He asks Shruti if she is ready to marry Karan. She nods. They begin the wedding ceremony. Vaidika was on her way out, Sahil turns to leave but the family stops him for the wedding. Sahil was speaking to Vaidika on call who says she has something important to tell him. Anjana calls him for Shruti's Kaniadaan. Sahil places his phone on a table and hurries. Vaidika continued on the other side.

Nidhi takes a chance and place the phone with her ear, she was shocked to hear Vaidika telling Sahil that Nidhi didn't bear his child. It was Karan's baby she had conceived. Nidhi was shocked to hear this from Vaidika's mother. There, Shruti and Karan were now married. They take blessings from all elders. Sahil says they must first take the blessings from Vaidika, she is the eldest in their lives right now.

He looks for his phone and wonders how it got turned off. There, Vaidika was trying Sahil's call. Sahil calls Vaidika. She asks Sahil if he had heard what she told him. The connected between them was weak. A lorry coming from the front hits Vaidika's car. Sahil screams Vaidika, Nidhi smirks.

Thanks for reading. Kindly use the button below to share to other Zee World lovers. Don't forget to follow my page for daily updates.