It has taken Nigeria international Victor Osimhen only 161 minutes spread across three matches to open his goalscoring account in the Serie A, 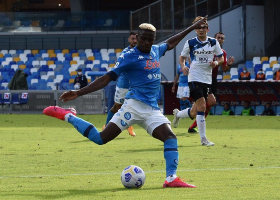 Napoli's record acquisition in history bagged his first goal in the Italian top-flight as the Blues thrashed Atalanta 4-1 at Stadio San Paolo on Saturday afternoon.

Osimhen fired blanks on his debut vs Parma on September 20 and also failed to score when he made his first start against Genoa the following weekend.

It was going so well for Napoli inside 30 minutes with Hirving Lozano netting a brace and an additional tally from Matteo Politano giving them a 3-0 lead and the scoreline became more emphatic when Osimhen added a fourth.

In the 43rd minute, the Super Eagles star chested a long ball upfield from former Arsenal goalkeeper David Ospina, then turned and drilled low into the bottom corner.

Atalanta pulled a goal back through Sam Lammers in the 69th minute but it only ended up being a consolation goal.

Osimhen made way for Andrea Petagna with eight minutes remaining.

Those Insulting Bola Tinubu And President Buhari Should Kindly Read This.

Remember their Names: 6 U21 Shakhtar Stars that Destroyed Real Madrid (3 are Brazilians)

Top 10 most valuable left backs in the world and their worth.

Who should be the main Super Eagles striker?