Which Continent has the best front three?

The international break is here as players have been called for their international duty for their different nations. Judging from three continents, Europe, Africa and South America which continents has the best attacking trio in football. 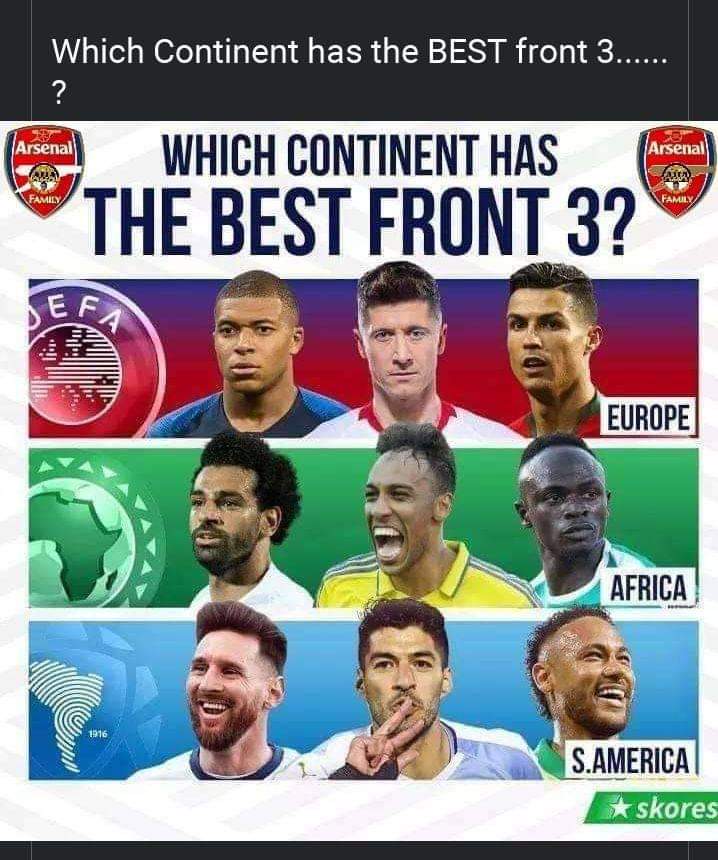 Kylian Mbappe Lottin: The French international who plays for Paris Saint Germain has scored 16 international goals for France since 2018.

Robert Lewandoski: The Polish striker has made 114 caps for his country scoring 63 goals.

Cristiano Ronaldo: The Portuguese international has represented his Country since 2003. He has scored 101 goals in 167 appearances.

Europe attacking trio has scored 180 international goals all together.

Mohamed Salah: The 28-year old Egyptian forward has scored 43 goals in 68 appearances since 2011.

Pierre Emerick Aubameyang: The Gabon international captain has scored 25 goals from 63 appearances since 2009.

Sadio Mane: The Senegalese forward has scored 19 goals in 69 appearances since 2012.

Africa attacking trio has scored 87 international all together.

South America attacking trio has scored 199 goals all together.

Which Continent has the best attacking trio?

Content created and supplied by Sportified.Opera News is a free to use platform and the views and opinions expressed herein are solely those of the author and do not represent, reflect or express the views of Opera News. Any/all written content and images displayed are provided by the blogger/author, appear herein as submitted by the blogger/author and are unedited by Opera News. Opera News does not consent to nor does it condone the posting of any content that violates the rights (including the copyrights) of any third party, nor content that may malign, inter alia, any religion, ethnic group, organization, gender, company, or individual. Opera News furthermore does not condone the use of our platform for the purposes encouraging/endorsing hate speech, violation of human rights and/or utterances of a defamatory nature. If the content contained herein violates any of your rights, including those of copyright, and/or violates any the above mentioned factors, you are requested to immediately notify us using via the following email address [email protected] and/or report the article using the available reporting functionality built into our Platform. Read more>>