Under 23 Potentials In EPL; See The Countries And Clubs Having The Highest U23 Potentials.

It is no longer a controversial issue that the English Premier League is the best League among the European Leagues. The EPL consist of the most valuable and best players in the football world, have a lot of fans and viewers.

So many young players from different countries across the World are playing in the English Premier League, where most are contributing earnestly and brilliantly to the success of their teams.

Also, the young players are the future of their respective national teams, and teams in the Premier League (if they're not been transfered outside the league).

The under 23 players (that is players whose age are below 23 years) which will be listed below, are the top potentials of the English Premier League; Their names include: 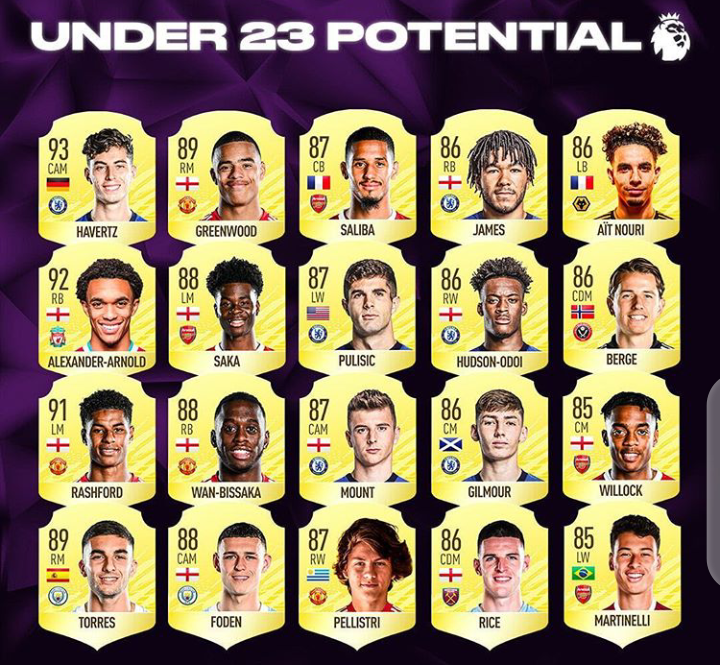 These are the future stars for their national teams, and their teams in the English Premier League.

What do you think about these players?

Content created and supplied by Hefohee.Opera News is a free to use platform and the views and opinions expressed herein are solely those of the author and do not represent, reflect or express the views of Opera News. Any/all written content and images displayed are provided by the blogger/author, appear herein as submitted by the blogger/author and are unedited by Opera News. Opera News does not consent to nor does it condone the posting of any content that violates the rights (including the copyrights) of any third party, nor content that may malign, inter alia, any religion, ethnic group, organization, gender, company, or individual. Opera News furthermore does not condone the use of our platform for the purposes encouraging/endorsing hate speech, violation of human rights and/or utterances of a defamatory nature. If the content contained herein violates any of your rights, including those of copyright, and/or violates any the above mentioned factors, you are requested to immediately notify us using via the following email address [email protected] and/or report the article using the available reporting functionality built into our Platform. Read more>>