In recent times, lots of famous pastors across the globe are believed to be fake. “WHAT IS THE REASON?” many people ask. Some people link it to the fact that the world is gradually coming to an end. Well, it might be true because even in the Bible in (Matt 24: 4-5) it states that “Jesus answered “Watch out that no one deceives you. For many will come in my name, claiming I am the Messiah and will deceive many.) But the question most people ask is “Who Are The Fake Pastors? 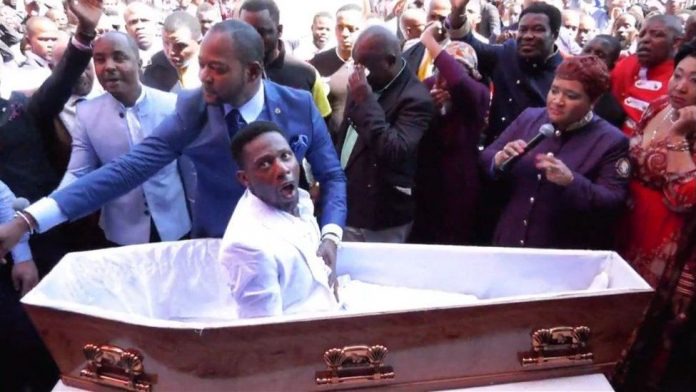 Read on to know about the Top 5 South African Pastors Believed To Be Fake Pastors;

Lasego Daniel is a pastor of Rabboni Centre Ministries located at the capital of Pretoria in South Africa. He has been in the headlines for over 5 times for commanding church members to engage in certain inhuman acts claiming they were directions from God and from the Bible. On one occasion he commanded his church members to eat grass if they’d want to get closer to God. This happened when he was having a Sunday service near Pretoria. Immediately he commanded that they eat grass most of the congregants fell to the floor and begun eating the grass around them. On some occasions, he has been said to have urged his church members to drink petrol with the assurance that he had prayed over it and turned it into pineapple juice and also walked on many of the church members. 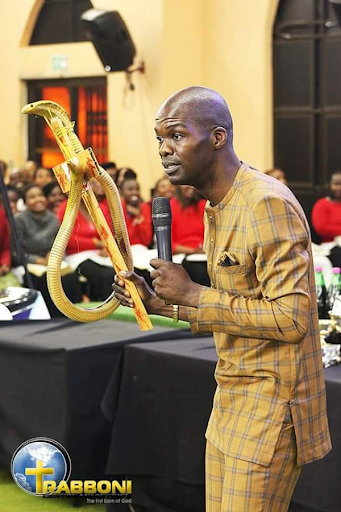 Alph Lukau is also a wealthy pastor of the Johannesburg based Alleluia International Ministries. It has been said that during a church funeral in February the pastor supposedly raised the dead man from the coffin back to life. This caused a worldwide uproar as many people mocked him and asked him to go wake Nelson Mandela from the dead. Through further investigation, it was found out that everything that happened was staged.

Prophet Mboro as he is known to be called is another pastor whose case has said to be controversial after he did the unthinkable in his church. Prophet Mboro was said to have ordered his church members to remove their underwear and wave them in the air during a Sunday service. He asked them to do this to attract angels from heaven. He ordered them to hold their underwear high whiles holding their private part so that the angels can impregnate and bless them. He then asked the church if they didn’t like what was going on and surprisingly everyone in the church screamed they loved it. And quite surprisingly the pastor him had taken off his underwear and was waving it.

Penuel Minguni is a pastor of the End Times Disciples Ministries. He was said to have allegedly commanded his church members to eat live snakes with the assurance that he had prayed and turned them into chocolate. This according to him he did to test their faith. He backed his cruelty with Romans 14-2 which says “One person’s faith allows them to eat anything but another whose faith is weak eats only vegetables. He was reported to have fed them live frogs and cockroaches and even dog meat on another occasion. Reports shows that he had been in police custody for some time over those cruel acts.

Prophet Bushiri is a pastor from Malawi based in South Africa. Prophet Bushiri has also been known for performing very fake miracles which some have led him to interrogation. On one occasion he supposedly performed a miracle for a man’s children. He supposedly called a man from the congregation and said he wanted to pray for his children. He after several tries to mention one of the children’s names failed and said he would capture it. He asked for an Ipad and took one from the front row and after some time a child’s picture appeared on the phone which happened to be the man’s child. He did the same thing again and the wife of the man’s picture appeared. Through further investigation it was found out that he knew the man and the Ipad he had taken was the man’s and he had the picture of the child and mother stored on it. A clearer look at the video saw him double tapping on the gallery section to show the child’s picture and also turning his back to the camera to capture the wife’s picture.

Content created and supplied by MegaMaster.Opera News is a free to use platform and the views and opinions expressed herein are solely those of the author and do not represent, reflect or express the views of Opera News. Any/all written content and images displayed are provided by the blogger/author, appear herein as submitted by the blogger/author and are unedited by Opera News. Opera News does not consent to nor does it condone the posting of any content that violates the rights (including the copyrights) of any third party, nor content that may malign, inter alia, any religion, ethnic group, organization, gender, company, or individual. Opera News furthermore does not condone the use of our platform for the purposes encouraging/endorsing hate speech, violation of human rights and/or utterances of a defamatory nature. If the content contained herein violates any of your rights, including those of copyright, and/or violates any the above mentioned factors, you are requested to immediately notify us using via the following email address [email protected] and/or report the article using the available reporting functionality built into our Platform. Read more>>