Top 4 Richest People In The World And Their Net Worth's As At 2020 Nov. 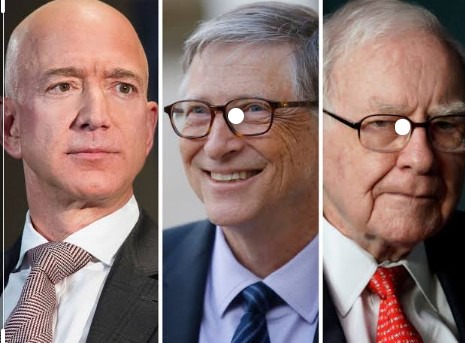 The world has several wealthy person who do control it's economy and these people have been on the headlines for a long time now.

On Tuesday, the world had another new billinare rising after he made lots of profits from Tesla electric cars company and he overtook Bill Gates to be the second richest person in the works after Jeff Bezos.

Below is the latest list of the richest person's in the world as outlined by the Bloomberg.

Jeff Bezos is the Founder and the Chief executive officer of the Amazon.

$184.5 billion according to the Bloomberg.

He is the second richest peron ok the world currently with an approximate net worth of $140.6 Billion.

Elon Musk is the latest third richest Billionare in the world and he overtook Bill Gates to come at the third position after the growth of his share prices in the sale of the Tesla electric car's.

He is approximately worth $105.5 billion.

Bill Gates is the fourth person in the world currently and he dropped into the position after he was overtaken by Elon Musk.

He is the founder of Microsoft with a networth of over $118.5 Billion.

Follow me for more information on this and more!

Content created and supplied by THECAMERA.Opera News is a free to use platform and the views and opinions expressed herein are solely those of the author and do not represent, reflect or express the views of Opera News. Any/all written content and images displayed are provided by the blogger/author, appear herein as submitted by the blogger/author and are unedited by Opera News. Opera News does not consent to nor does it condone the posting of any content that violates the rights (including the copyrights) of any third party, nor content that may malign, inter alia, any religion, ethnic group, organization, gender, company, or individual. Opera News furthermore does not condone the use of our platform for the purposes encouraging/endorsing hate speech, violation of human rights and/or utterances of a defamatory nature. If the content contained herein violates any of your rights, including those of copyright, and/or violates any the above mentioned factors, you are requested to immediately notify us using via the following email address [email protected] and/or report the article using the available reporting functionality built into our Platform. Read more>>