Throwback: When Maradona kissed Pele as he was surrounded by Okocha, Kanu, Putin at 2018 Fifa World Cup in Russia 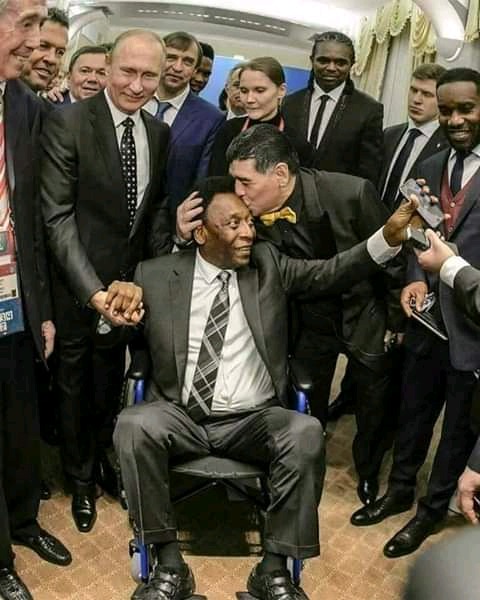 Before the 2018 FIFA World Cup started, global dignitaries and football legends were in Russia to witness and partake in the honeymoon of fanfares that dominates the opening ceremony of the FIFA World cup.

One of them was legendary Edson Arantes do Nascimento known as Pele, who was seated in a wheelchair, and was largely welcomed by great footballers and political powers like Putin and others.

The photo is a joy to watch: legendary Maradona planting kiss on his forehead. Russian President holding his hand. Oh, he has finally touched that legendary hand.

Okocha, Kanu and others looked with wonder filled eyes as laughter annexed their faces in delight.

You would remember that there was a time that those legs of Pele were tearing defenders apart.

You would remember that there was a time he was massively scoring goals like fun. To the extent that, he scored more than 1000 goals in his career.

It is in this light he is regarded widely as the greatest footballer of all time. Some arguing that if Cristiano Ronaldo and Lionel Messi should be considered the greatest of all time, they should, at least win a World Cup. Unfortunately, they have not won any.

Today, you see such a man who conquered time and space with his feet cannot move again freely with those legs. Today he watches while sitting in a wheelchair or chair in his home.

How time flies. What does his situations teach? Nothing last forever.

When you have the time to make an impact in this world utilize it. When you are young, talented, vibrant and promising make use of your youthful exuberance and agility to achieve a lot of things.

Because old age comes with weaknesses, fragility, sicknesses and slow spacing. You're not far from the grave. However, even when you are gone you have left marks in the sand of time.

Today, Pele is 79. Many of our present and even generation before us didn't watch him.

We only read him or watched his games on YouTube videos to sing his praises.

Get up from the rumbling of your grumbling sleep and look at the areas you are extremely good at and exploit and explore.

Content created and supplied by Maduchisom1.Opera News is a free to use platform and the views and opinions expressed herein are solely those of the author and do not represent, reflect or express the views of Opera News. Any/all written content and images displayed are provided by the blogger/author, appear herein as submitted by the blogger/author and are unedited by Opera News. Opera News does not consent to nor does it condone the posting of any content that violates the rights (including the copyrights) of any third party, nor content that may malign, inter alia, any religion, ethnic group, organization, gender, company, or individual. Opera News furthermore does not condone the use of our platform for the purposes encouraging/endorsing hate speech, violation of human rights and/or utterances of a defamatory nature. If the content contained herein violates any of your rights, including those of copyright, and/or violates any the above mentioned factors, you are requested to immediately notify us using via the following email address [email protected] and/or report the article using the available reporting functionality built into our Platform. Read more>>