This is Manchester United's top ten most expensive signing

Manchester United is one of the most oldest football club in England with a fanbase spread all over the world. Manchester United have won a total of 20 premier league, three champion league, one Europa league, one club cup and a host of both community shield, Fa cup and Carling cup.

United is been regard as one of the most successful premier team in England having been the only club to produce winners of Ballon d'or, with the likes of Bobby Charlton, Matt Bubes and Cristiano Ronaldo. 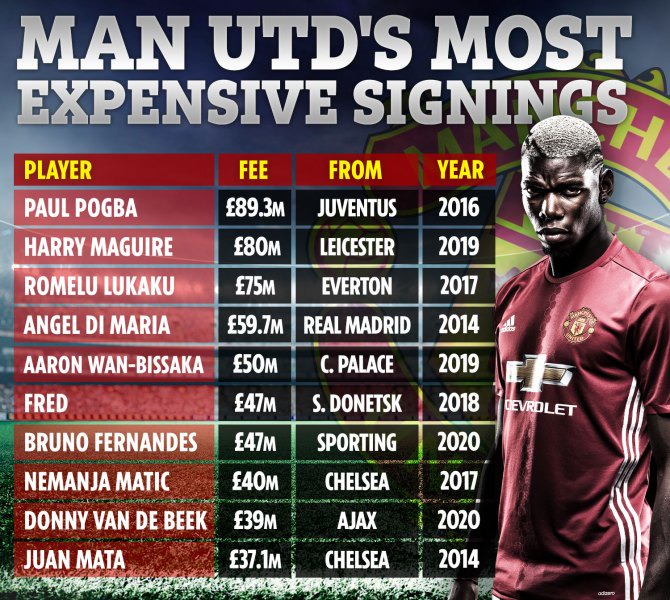 Sir Alex Ferguson is the only longest serving coach for the Red Devils winning a total of 26 trophies in his 25 years at the club. Since the Scott man retirement in 2013 United have been struggling to fill that void that he left and bring back glory to the Threatre of Dreams.

The have been some big money signing in the past seasons but yet none can justify the amount been spend. Below is United top 10 most expensive signing, please do well to liked and drop your comment below;

Content created and supplied by Kingtexzy.Opera News is a free to use platform and the views and opinions expressed herein are solely those of the author and do not represent, reflect or express the views of Opera News. Any/all written content and images displayed are provided by the blogger/author, appear herein as submitted by the blogger/author and are unedited by Opera News. Opera News does not consent to nor does it condone the posting of any content that violates the rights (including the copyrights) of any third party, nor content that may malign, inter alia, any religion, ethnic group, organization, gender, company, or individual. Opera News furthermore does not condone the use of our platform for the purposes encouraging/endorsing hate speech, violation of human rights and/or utterances of a defamatory nature. If the content contained herein violates any of your rights, including those of copyright, and/or violates any the above mentioned factors, you are requested to immediately notify us using via the following email address [email protected] and/or report the article using the available reporting functionality built into our Platform. Read more>>