The farmers that were killed on Saturday caused their death by refusing to pay their tax - Man says. Over 43 farmers were killed on Saturday in Borno State by some Boko Haram members in Kwashebe.

The terrorists were said to have tied up the victims who were working on the fields before sending them to their early graves in an unpleasant and gruesome manner.

Although a member of the state Civilian Joint Task Force, Babakura Kolo, who assisted some of the survivors, put the number of people killed at 43, the United Nations on Sunday said 110 rice farmers lost their lives during the attack.

The ugly incident has raised lots of negative talks and comments all over the country and outside the country as the UN , United Nations tagged it a grave attack on innocent civilians and the pepertrators should be brought to book. 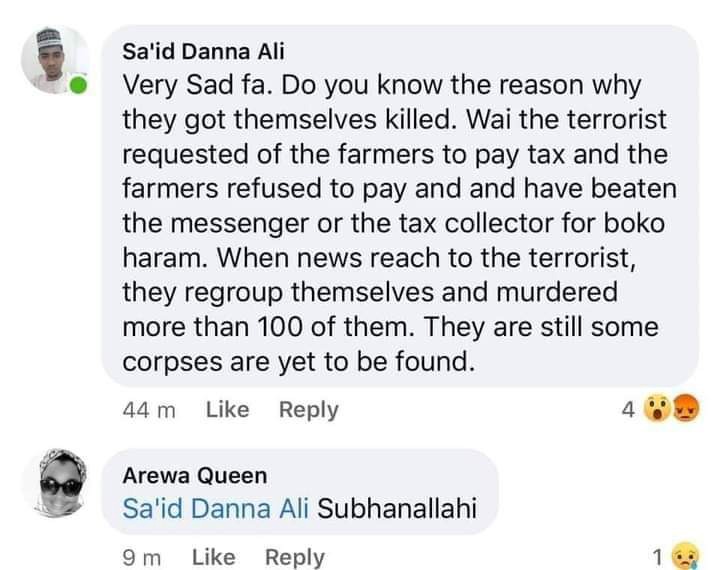 A young man by name sa'id Danna Ali, has taken to his social media handle claiming that the farmers got themselves killed. He said that they caused their deaths by refusing to pay their tax as requested by the messenger or the tax collector of the Boko Haram.

According to him, the Terrorists murdered over 100 farmers and that there are still some corpses yet to be found.

Do you think that refusal to pay their taxes is enough to murder them?

Do you think they were wrong not to have paid their taxes?

Content created and supplied by ChidimmaJewel.Opera News is a free to use platform and the views and opinions expressed herein are solely those of the author and do not represent, reflect or express the views of Opera News. Any/all written content and images displayed are provided by the blogger/author, appear herein as submitted by the blogger/author and are unedited by Opera News. Opera News does not consent to nor does it condone the posting of any content that violates the rights (including the copyrights) of any third party, nor content that may malign, inter alia, any religion, ethnic group, organization, gender, company, or individual. Opera News furthermore does not condone the use of our platform for the purposes encouraging/endorsing hate speech, violation of human rights and/or utterances of a defamatory nature. If the content contained herein violates any of your rights, including those of copyright, and/or violates any the above mentioned factors, you are requested to immediately notify us using via the following email address [email protected] and/or report the article using the available reporting functionality built into our Platform. Read more>>