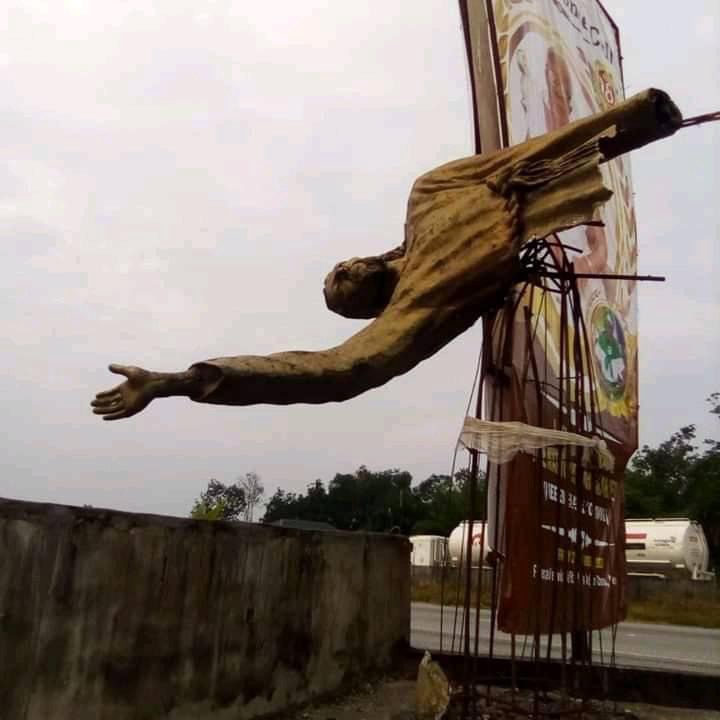 Suspected loyalists of a former Delta State House of Assembly lawmaker in Evwreni community in Ughelli North Local Government Area on Wednesday night allegedly destroyed the statue of Jesus Christ at the entrance of the community while coming from the birthday ceremony of the lawmaker’s wife, Politicsgovernance reports.

The rampaging youths suspected to be members of the disbanded vigilante also destroyed other peoples marriage and burial banners at the junction and other junctions along the main road of the community up to the community secondary school leaving that of former lawmaker’s late mother burial which is slated for the weekend.

The loyalists, it was gathered, went into town vandalising solar street light batteries installed by NDDC and DESOPADEC, street signposts and threaten to stop the burial of a 34-years old late Sylvester Adjogbe, who was gruesomely murdered in the heat of the community crisis, who would be interred on Friday, 27 November, 2020 in the community.


A community source who spoke on anonymous condition, appealed to the Delta State Commissioner of Police to urgently wade in and arrest the ugly trend, before it escalates into another bloody situation.

The source said; “If nothing is done, there will be another blood letting on Friday because the disbanded vigilante members have vowed to stop the burial of late Sylvester Adjogbe.

When our correspondent visited Evwreni community on Thursday, there was palpable tension as combined security agents mounted strategic positions to forestall breakdown of law and order in the community.

All efforts to contact the former lawmaker for comments were not successful as text message sent to his mobile line was not replied as at the time of this report.