Hillary Clinton, the wife of former president of America Bill Clinton is one of the most influential women in the world. The former secretary of states and former first lady of USA is an inspiration to many. 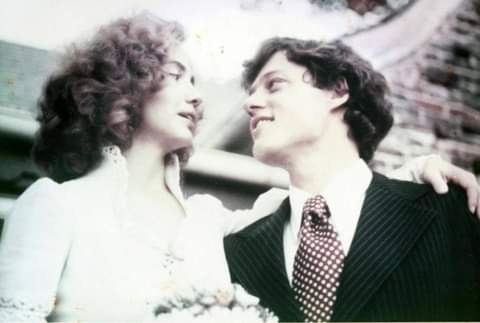 According to report, Hillary Diane Rodham met the future president, Bill Clinton, while they were both attending Yale Law School in 1971.

Hillary said he saw that Bill was staring at her in the library, so she went up to him and introduced herself. They fell in love and he proposed three years later. Bill wanted a big wedding while she didn’t even care about an engagement ring (he gave her one anyway.)

The wedding was intimate, but Bill said till the eve of the wedding, her wife didn’t even have a dress.

It was Hillary’s mother who went to Dillard’s in the Fayetteville Mall and bought her daughter a Jessica McClintock Victorian lace gown.

According to reports, Hillary and Bill married in the living room of their new home in Arkansas on October 11, 1975. A local Methodist minister and his wife officiated the ceremony as 15 of their closest friends and family looked on.

Content created and supplied by Oluwadahunsi.Opera News is a free to use platform and the views and opinions expressed herein are solely those of the author and do not represent, reflect or express the views of Opera News. Any/all written content and images displayed are provided by the blogger/author, appear herein as submitted by the blogger/author and are unedited by Opera News. Opera News does not consent to nor does it condone the posting of any content that violates the rights (including the copyrights) of any third party, nor content that may malign, inter alia, any religion, ethnic group, organization, gender, company, or individual. Opera News furthermore does not condone the use of our platform for the purposes encouraging/endorsing hate speech, violation of human rights and/or utterances of a defamatory nature. If the content contained herein violates any of your rights, including those of copyright, and/or violates any the above mentioned factors, you are requested to immediately notify us using via the following email address [email protected] and/or report the article using the available reporting functionality built into our Platform. Read more>>