President Donald Trump might not be a perfect or religious person. He might not be a Saint or a devotee of any spiritual setting. However, it could be asserted that he was, by one way or the other, used to fulfill some long-awaited prophecies. 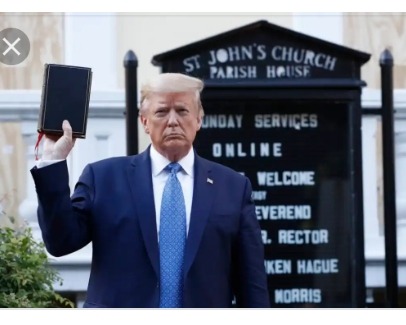 It is noted in the Bible that God chose various leaders, rulers, and kings to fulfill His prophecies. God has used many imperfect men as leaders. God chose Moses who had a speech impediment and killed an Egyptian. He chose David who committed adultery and murder. He chose Saul, a persecutor of Christians, who later changed his name to Paul. Those three men alone authored a significant portion of the Bible.

We also read about King Jehu in the Bible, and we read about king Cyrus in the Scripture. The two kings were not parts of the establishment, they did things in their way and lived their lives the way they liked.

King Jehu destroyed the house of Ahab, and the wicked queen Jezebel. He was a disrupter, who destroyed the evildoers of Baal. Even though he was never a jew or among God's people, God used him to amend some loopholes against Isreal.

Also, King Cyrus was used by God to deliver His people, even though he did not know or serve God.

Isaiah 45:4-5 "For Jacob my servant's sake and Israel mine elect, I have called you by name: even though you did not know me.

I am the LORD, and there is none like me, I girded you with strength, though you did not know me":

Many people find it difficult to believe that God can use a non-devotee to carry out his assignment. A man does not necessarily need to be holy, perfect, or committed before God can use him.

This is because all men, both the saint and sinners are the handiwork of God. God can use any man because he created all men.

There are signs that God had His Hands involved in the choice of President Trump to fulfill the prophecy in the Bible. Donald Trump can be likened to King Jehu or king Cyrus of our time.

Just like king Jehu, Donald Trump is known to be a disrupter and fighter of antagonistic and terrorist groups. He was not part of the Washington establishment. Yet he has the strength to fight off endless attacks. While Trump is seen as an imperfect being and only God knows the status of his faith, it is fascinating to see some facts connected to him and some prophetic signs.

Now, how does Trump relate to Israel, which is the land choosing by God?

On December 6, 2017, roughly 70 years after the nation of Israel was reborn, President Donald Trump recognizes Jerusalem as the nation’s capital, proclaiming an end to Jerusalem 70-year exile, as prophesied by prophets, Jeremiah and Daniel.

The 70 years of the Abomination of desolate was first prophesied by Jeremiah in Jeremiah 25:12.

It was also reckoned by Daniel, as stated in Daniel 9:2

“ Daniel 9:2 states, “In the first year of his reign I, Daniel, understood by the books the number of the years specified by the word of the Lord through Jeremiah the prophet, that He would accomplish seventy years in the desolations of Jerusalem.” This symbolized the 70 years Israel was held captive by Babylon, during which Jerusalem has been tampered with by the gentiles.

These signs are beyond coincidences, which can explain the fight in America between good and evil.

We should forget not that Donald Trump fights against some legalized immorality in the US. He disallowed gay right, same-sex marriage, abortion, and others

He might be seen by many as a racist, discriminator, arrogant, and so on, but he is just as imperfect as king Jehu and King Cyrus who were used by God, irrespective of their faith.

Content created and supplied by Hanmike.Opera News is a free to use platform and the views and opinions expressed herein are solely those of the author and do not represent, reflect or express the views of Opera News. Any/all written content and images displayed are provided by the blogger/author, appear herein as submitted by the blogger/author and are unedited by Opera News. Opera News does not consent to nor does it condone the posting of any content that violates the rights (including the copyrights) of any third party, nor content that may malign, inter alia, any religion, ethnic group, organization, gender, company, or individual. Opera News furthermore does not condone the use of our platform for the purposes encouraging/endorsing hate speech, violation of human rights and/or utterances of a defamatory nature. If the content contained herein violates any of your rights, including those of copyright, and/or violates any the above mentioned factors, you are requested to immediately notify us using via the following email address [email protected] and/or report the article using the available reporting functionality built into our Platform. Read more>>