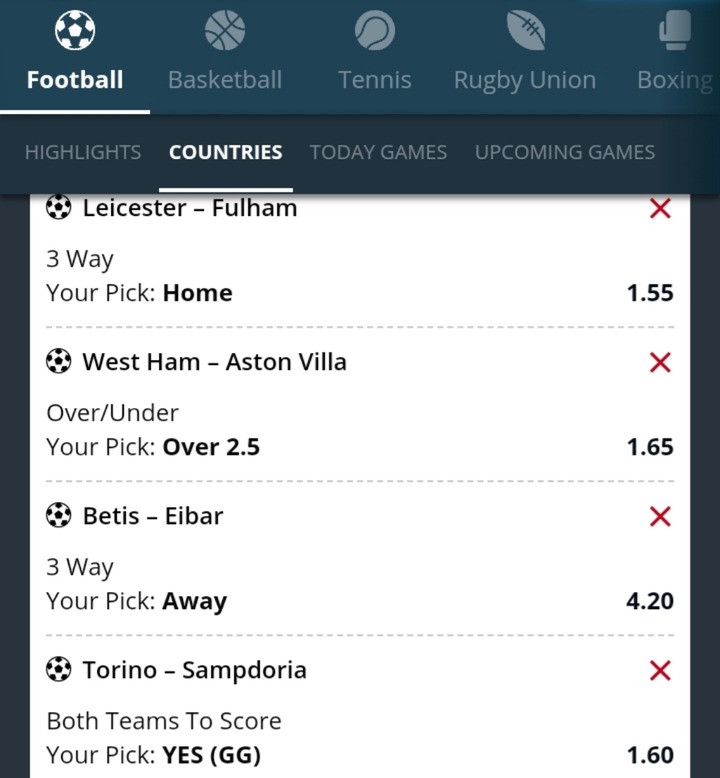 View pictures in App save up to 80% data. Leicester City vs Fulham

Leicester have continued with their good form, they have won six of their last eight matches in all competitions.

Fulham have collected points from only two teams below them.

Leicester City have not dropped points to a team under top eight in the league.

Aston Villa strikers have been brilliant this season, they have scored in seven of their last eight games.

Villa have scored over 2.5 goals in three matches on the road this season.

West Ham on the other hand have just lost one of their last seven matches including a win over Leicester and Wolvethamptons.

Aston Villa have not been better this season by losing three of their last four matches this season.

Real Betis have performed dismally this season, they have lost six in eight matches.

Eibar on the other hand have lost just once in the last six league matches.

In the last four meetings between these two sides, Eibar have emerged winners.

Torino matches have witnessed goals, more than 3.5 goals have been scored in six of their last seven fixtures.

Sampdoria on the other hand have seen over 3.5 goals scored in five of their last seven games.

Torino have only won once in seven of their league matches.

Genoa have not been lucky with goals this season, they have only scored seven goals in eight league matches.

Parma too have not been scoring, they have eight goals in eight games this season.

Parma have shared the spoils in three of their last four matches.﻿