In Abuja, Cattle Graze Across City But Traders Are Chased From Streets By Task Forces 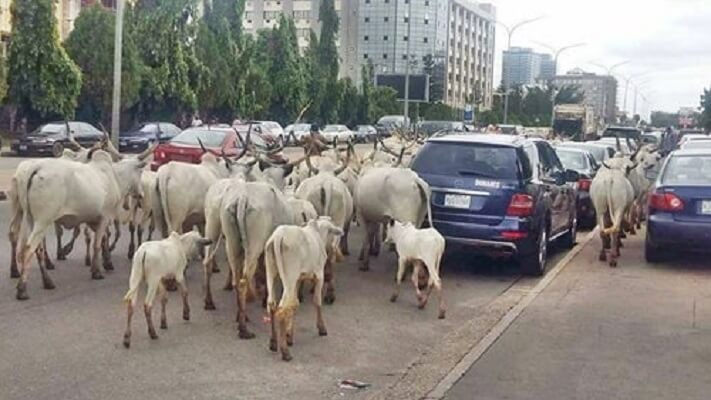 The passage of the animals caused a slight traffic hold up as motorist meander to avoid driving at the them. The cattle, long accustomed to vehicular traffic in the city, “hurriedly” cross the road to make way, but after frustrated motorists had hooted and hooted to frighten the animals.

This scenario had become common in the nation’s capital city and there’s hardly a section of the capital where cattle would not be found grazing.

The city has gotten used to seeing cattle graze around green areas while hawkers are pursued by merciless personnel of the Abuja Environmental Protection Board (AEPB) .

It became clear why cattle gets special status of untouchable while humans are daily harassed and taxed by AEPB which unleashed its men to every part of the city, seizing traders displaying their wares.

The Fulani man walks behind his cattle without a care about environmental task forces swooping on him or his cattle.

When the reporter asked the herder whether he was aware of environmental task force in the city, he said in Hausa :  “Do you know the owner of these cows? If you do,you wouldn’t have mentioned police, who is police?

He said the owner of the cattle instructed them to graze within the city for fear of cattle rustlers.

The herder’s story contrasts with that of a widow, Mary Ocholi, a satchet water hawker in Mabushi area who narrated her ordeal in the hands of the environmental protection operatives to THE WHISTLER.

She was arrested for hawking satchet water that was not worth one thousand Naira but asked to pay “fine” of five thousand Naira. It is her only source of livelihood and she has three children, including the one strapped to her back, to care for.

THE WHISTLER met her at the office of AEPB last Thursday while trying to get the officials to be more lenient with her.

“I have been here since morning when they arrested me and asked me to pay a fine of five thousand naira for the bag of water that is not worth a thousand naira,” she explained in frustration.

There were many people like her, other hawkers arrested in similar fashion and asked to pay N5000, although there were some that are fined less than that. Several women spoke to this website on  how the task force operatives have been frustrating their efforts to earn a living.

The AEPB was set up by the Abuja Environmental Protection Board Decree 1997, and Section 35 subsection (d & e) of the act states that “sells or displays or offers  for sale any goods or article of trade in a road junction, or any other unauthorised place; or erects or constructs any house, shed, kiosk or any other structure in an unauthorised place or in contravention of any plan or whether general or particular as may be prescribed by the appropriate authority is guilty of an offence under this decree.”

Section 20, paragraph (b) of the Act also states that “Any person who rears or keeps animals or birds likely to cause environmental nuisance such as offensive odours or noise or neglect or fails to confine the animals or birds to his premises is guilty of an offence and liable on conviction or a fine of not less than N5,000 or imprisonment for a term of three months …”

So why are cattle and herders not arrested as traders who violate the Act? The Director, Monitoring and Enforcement  of AEPB,  Dr Hassan  Abubakar,  said the perception that cattle are allowed to graze in the city is wrong,adding that they do not engage in selective arrests..

“The notion or believe is not true because you can’t meet ten violators and you arrest nine and leave one person or you go to a village and demolished the whole houses and leave one, because the one you left is still not safe. Therefore, what we are after is anything that poses as nuisance must be taking away. I challenge anyone who has proof or evidence to come with it, “he said, adding that many cattle herders and their animals had been arrested and fined.

“Just as you can see on my table, I have more than a thousand receipts. I gave instructions to all my staff that whoever paid a kobo should be given a receipt. Therefore, we have no sacred cows here because the law is not a respecter of anyone.”

But motorists who daily drive into cattle on major roads in the city would find it hard to believe there are “no sacred cows.”