How We Sold Burnt Heads Of Two Policemen To Native Doctor For N1,000 -Suspects 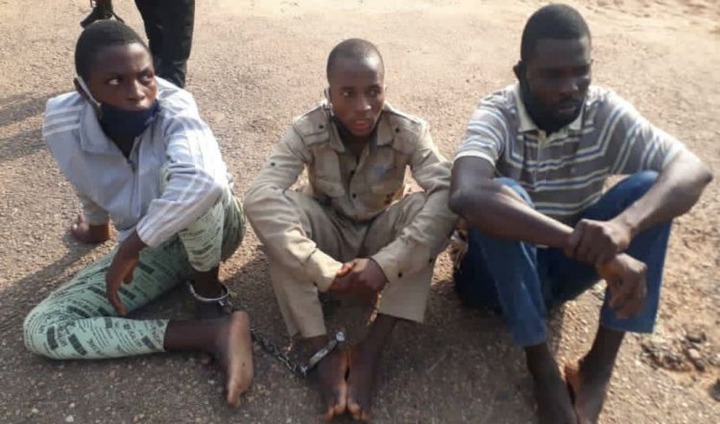 Looking at Adewale Abiodun, a 17-year-old boy, one is likely to perceive an innocent boy gradually approaching adulthood.

But hearing the confessions he made about how he and Aliu Mubarak (24) teamed up to sell the burnt heads of policemen killed during EndSARS protest in Ibadan, Oyo State, makes one wonder if it’s real.

However, seeing the pieces of the skull of the slain human beings they had with them, as evidence of their moves to make N1,000 from the sale, makes it shocking.

Abiodun, Mubarak and the third suspect, a native doctor, identified as Oladipupo Ifakorede, were arrested by the Quick Intervention Unit of Oyo State Police Command on Sunday, November 15, 2020 at Oluwo area of Ibadan, after the police operatives’ intelligence gathering and investigation exposed them.

Speaking on the arrest on Friday, November 26, during a press briefing, the state Commissioner of Police, Joe Nwachukwu Enwonwu told journalists that Abiodun and Mubarak confessed that they took two heads of the killed police away from the scene of incident, and sold them to a native doctor for N1,000.

Enwonwu added that the heads, which had dried up and was broken to pieces, were recovered from the native doctor, Ifakorede.

Ifakorede had opened up also that he paid N1,000 for the heads and had intended to use them for ritual purpose.

In an interview with Reporters At Large, one of the suspects, Abiodun, narrated how he became involved in the deal.

He narrated thus: “On Monday, October 22, Mubarak asked me to follow him to Alabata area in Ibadan, where his wife was staying.

“We got to Iwo Road and saw that the road had been blocked. Smoke was also billowing.

“We moved closer to see what was happening and saw that humans, which we learnt were policemen, were being burnt.

“The mob was hitting the burnt bodies with sticks, and started taking the body parts after tearing at them.

“Mubarak also came to me and said he wanted to take some of the body parts. I asked him what he wanted to do with them, and he replied that he had someone he would go and sell them to.

“Mubarak went to take the two heads, with some parts of them already knocked off with sticks.

“The native doctor told us he was not the one that would use them, but that he would take them to a Quranic scholar in Ilorin, Kwara State, to use them for ritual purpose.

“After leaving the residence of the native doctor, Mubarak and I went to a restaurant and used the N500 to eat.

“At about 7p.m., the same day, the native doctor saw me at a junction in our area, and gave me N500 again, making N1,000, as payment for heads we sold to him. Mubarak and I shared the money equally at N250 each the third day.”

Abiodun said he had known the native doctor before as an apprentice in fashion designing. He disclosed that his boss used to sew materials for Ifakorede, and used to send him to deliver the sewn materials.

Abiodun further stated that his mother had gone to an overnight ceremony and his father was away on trip as a tanker driver when the police came to arrest him.

Mubarak, 24, corroborated Abiodun’s confession, saying that they both met people at the gathering cutting different parts of the burnt policemen and using sticks to hit the remains.

“Some of the people removed hands, legs, fingers and feet, while some others gathered the ashes from the burnt bodies and took them away.“

I then told Abiodun that I would take the heads that had been packed aside. I found a nylon bag and put the heads inside.

“We left the place and went to Ifakorede’s residence at about 5p.m. We met him on the way and told him we had police heads to sell.

“He said we should not tell anyone about it, adding that he would send them to Ilorin. Then, he gave us N500, promising to give us the balance later.

“Truly, he gave the balance of N500 to Abiodun and we shared it equally,” Mubarak also gave an account.

He said he was arrested by the police three weeks later. He revealed that he also knew Ifakorede, as he used to sell local chicken eggs to the native doctor.

The third suspect, Ifakorede, also admitted collecting the heads of the slain policemen from Mubarak and Abiodun, and paying N1,000 for them.

Ifakorede disclosed that Mubarak initially demanded N3,000 as payment for the heads he was selling to him, but told him he could only pay N1,000 for such ‘little commodity.’

He said he intended to use them for money ritual before he was arrested by the police.

Reporters At Large learnt that the bones of the heads were recovered from the backyard of Ifakorede’s residence, where he covered them with sand.

Condemning the actions of the suspects, Enwonwu said that the police were making more efforts towards apprehending fleeing suspects who had known that they were being looked for.