After the president's speech yesterday, many people have come out to say one thing or the other on how the president should have addressed the ongoing protest in this country. rather after his speech yesterday, he warned the international community to make enough clarification before choosing a side to speak for, which made the speech to get different suggestion on how he should make negotiations with the protesters. 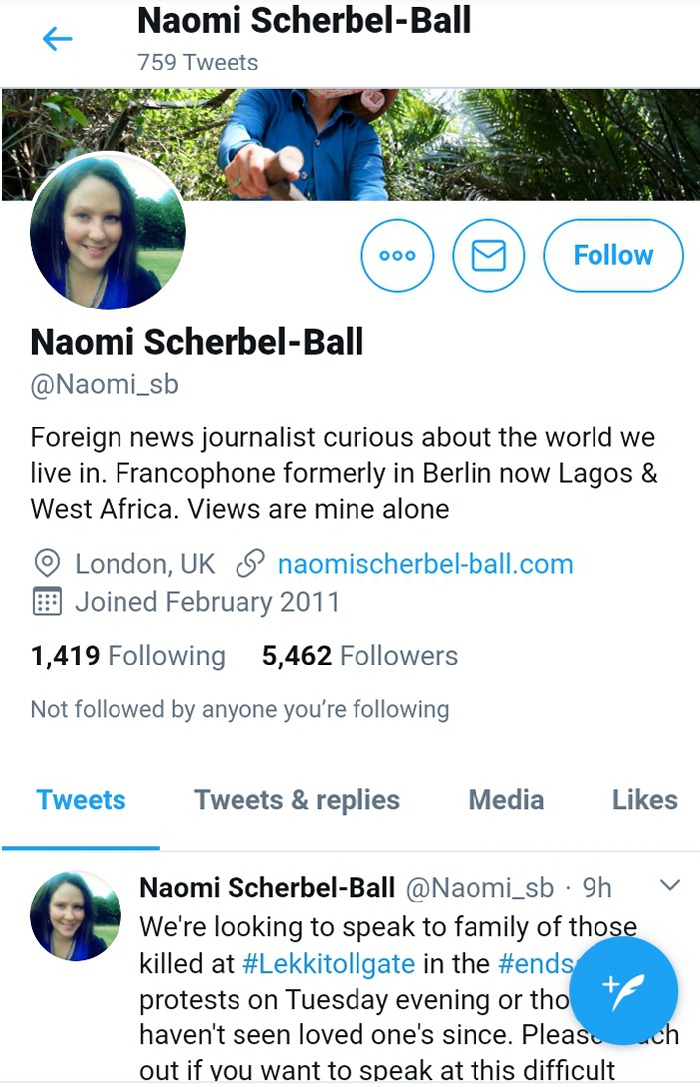 Now, few hours after Buhari's speech, different talks and opinions has already come up which is now surfacing on the internet that was how we saw what a UK Journalist told Nigerians to do now before is too late. Her name is Naomi Scherbel-Ball and she is a journalist and she is doing well in her career because if she is not doing well with her journalism work, she couldn't have told Nigerians what to do about this doing conflict. 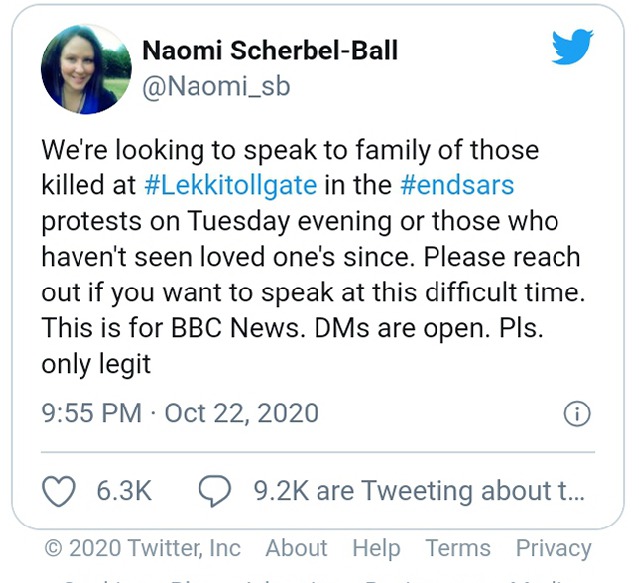 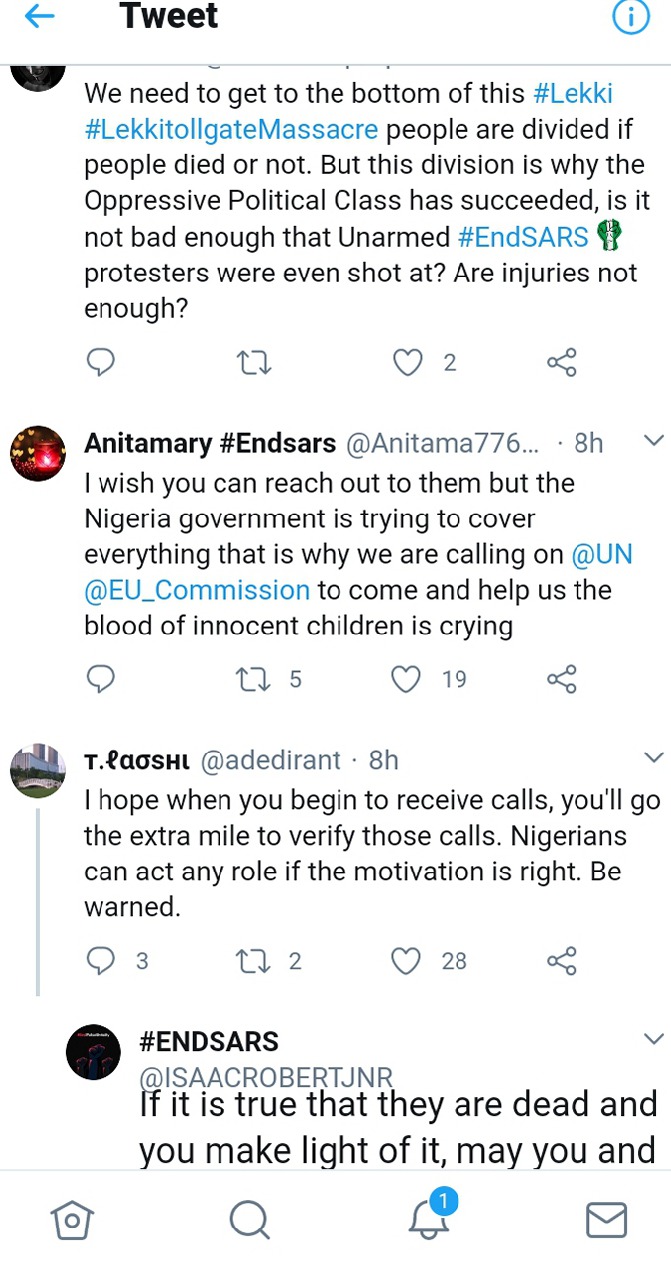 Let me break down to you the things she told Nigerians to do, she said they are looking to speak with the family of those people killed at Lekki Toll Gate during the EndSars protest on Tuesday evening or those who haven't seen their loved ones since. She also used that opportunity to urge Nigerians to reach out, if they want to speak at this difficult time. And don't forget to read people's reactions on her twitter post. 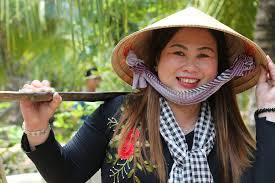 She also stated that this is BBC News and their DM's are open, and is only for legit facts. So screenshots of what she said is also here in other to backup with post, so confirm it and don't forget to comment and share to others so that they can do what this good journalist said we should do. Remember that this is coming few hours after Buhari's speech yesterday night. <blockquote class="twitter-tweet"><p lang="en" dir="ltr">We&#39;re looking to speak to family of those killed at <a href="https://twitter.com/hashtag/Lekkitollgate?data-src=hash&amp;ref_data-src=twdata-src%5Etfw">#Lekkitollgate</a> in the <a href="https://twitter.com/hashtag/endsars?data-src=hash&amp;ref_data-src=twdata-src%5Etfw">#endsars</a> protests on Tuesday evening or those who haven&#39;t seen loved one&#39;s since. Please reach out if you want to speak at this difficult time. This is for BBC News. DMs are open. Pls. 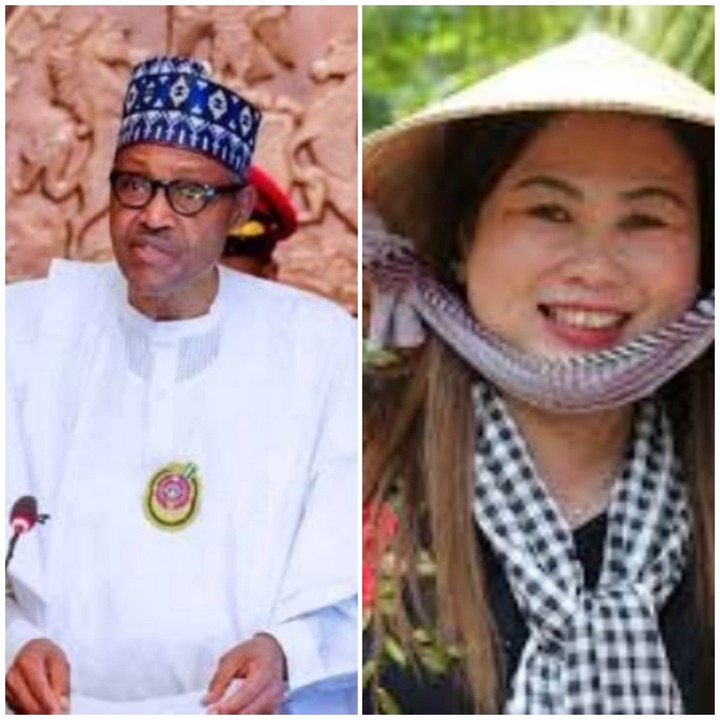 Content created and supplied by HealthWorker.Opera News is a free to use platform and the views and opinions expressed herein are solely those of the author and do not represent, reflect or express the views of Opera News. Any/all written content and images displayed are provided by the blogger/author, appear herein as submitted by the blogger/author and are unedited by Opera News. Opera News does not consent to nor does it condone the posting of any content that violates the rights (including the copyrights) of any third party, nor content that may malign, inter alia, any religion, ethnic group, organization, gender, company, or individual. Opera News furthermore does not condone the use of our platform for the purposes encouraging/endorsing hate speech, violation of human rights and/or utterances of a defamatory nature. If the content contained herein violates any of your rights, including those of copyright, and/or violates any the above mentioned factors, you are requested to immediately notify us using via the following email address [email protected] and/or report the article using the available reporting functionality built into our Platform. Read more>>