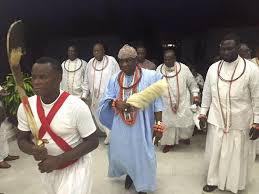 Oba Osemwende (1816–1848) of Benin had dispute with the King of Akure. All effort was made to settle this without it spilling into full war. Without any success Akure and Benin went to war.

The Deji of Akure called Arakale "Owafadeji", 29th Deji of Akure(1768 - 1818) was a very powerful man gifted with war strategy. As the way between Benin and Akure progress the king of Akure kept gaining ground, a sequence that caused lot of trouble for the Oba Benin.

In those days land was only own in Benin by the Oba Benin and a very few privileged. This made the offer a very significant one.

The assassins of the kings went one after the other to Akure in a bid to kill the king and deliver his head to the Oba of Benin but non of them made it back alive.

The strong medicine men of the king tried their best to kill the king of Akure but the all failed.

During this time there was a war between the itsekiri of Warri Kingdom and Some Ijaws of present day Bayalsa State. This Ijow group was so powerful that they where advancing towards what is now Bomadi.

A powerful medicine man called Ikaye was summon by the Olu Warri Ogiame Akengbuwa I A.K.A Eyeolusan Joao (1808– 14 June 1848) to go and end the battle. Ikaye went to the adjoining river, made some incarnation and buried a charm in the river. The water flows to the warring Ijaw tribe area. When they drank out of the water they start falling dead one man after another till the village was almost whipped out and emissaries where sent to beg the Olu Of Warri.

When the Oba messengers heard of the deeds of the Iyatsere Egharegbemi descendants, called Ikaye, they went to the king of Benin and told him of Ikaye.

The Oba of Benin sent messenger to the Olu of Warri (Olu Akengbuwa) requesting to have audience with Ikaye. The king of Warri told the messengers that he will ask Ikaye to comes to the Oba palace.

The powerful Ikaye went to the palace of the Oba of Benin. When the king of Benin saw him he mockingly said that how can a man like Ikaye be stronger than all his medicine man. Ikaye responded and said that he is the one that carries aggrieved innocent people on his back to coven to settle their problem with witches in broad day light and return them to earth alive and unharmed, that he is a white witch(A witch that does good deed with his power) and it was his kind deed that bore him the name Ikaye which means A feather that give favour in his itsekiri language.

The king of Benin was impressed. He told Ikaye that if he (Ikaye) can go to Akure and return with the head or crown of the king of Akure, that he will give Ikaye land as big as the steps Ikaye can take on a day walk. Ikaye agreed to the king’s offer and asked to be excused.

Ikaye appeared in Akure market as a very beautiful Mixed race lady. When the people in the market saw this beautiful lady they gathered around her as most of them have never seen a mixed raced person before, and not a very pretty one. This curiosity leads to commotion that attracts the kings guards attention.

The lady (Ikaye) was taken to the kings palace by the guards. When the king saw her he toke her to his chamber to learn more about this charming lady. Ikaye(the lady) told the king that she came from a distant land but lost her way in the forest after traveling for many days. The king of Akure gave her food and a bed to sleep at night.

In the midnight Ikaye went to the kings room after using his charm to overcome the kings guard. He killed the king and took off the crown, then left Akure.

The king of Benin was in his Palace with his top chiefs when Ikaye Appeared with the King of Akure crown. His presence was not a very welcomed one to some of the people in the palace. Not just because he entered uninvited but because he was a stranger that could achieved what they failed to achieve.

The Oba Benin welcomed Ikaye and the crown was confirmed to be that of the King of Akure. The Oba asked Ikaye to go home. That the next day Kaye should Walk from Odo Okun (Odo Okun was the old name for what is now known as Benin River) boundary towards him that where ever they meet Ikaye will be given from that point back to Odo Okun Boundary.

The next day Ikaye over slept, unknowingly to him the Oba took the sand from his footsteps to make a Charm that will delay him(Ikaye) movement. As a strong man Ikaye managed to overcome part of the charm. He woke up a bit late and start walking toward the Oba palace. The Oba meet him by the old boundary of Ologbo and gave Ikaye all the land behind Ikaye that made up what is now known as Ologbo.

Ikaye and his household relocated to his newly gotten land and build his settlement and palace there.

Kaye and his household speak the Itsekiri language and continue with Ebure serving as they used to do in Warri Kingdom . They continued with all the tradition of Itsekiri.

Kaye told his people he will not die, but when the time for him to die is near, He will flee away, if He did not return they should believed that he is dead. And it happened as he said. Kaye was the only powerful man in Warri Kingdom (Itsekiri land) that his corpse was not seeing nor buried.