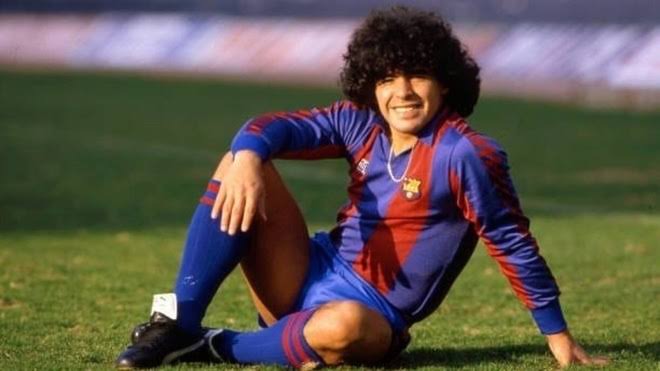 View pictures in App save up to 80% data. Diego Maradona on 4th June 1982, signed for Barcelona after Nicolau Causaus became the Vice President in 1978. Causaus was also an Argentina, he travelled back to his country for break when he meet the 17 years old, Argentina magician.

He quickly tries to bring the Argentina wonderkid to Barcelona but has a lot of obstacle on the way as the Argentina FA refused to let their Star player travel to an European country, Spain who is hosting the 1982 World Cup, but finally Nicolau Causaus made a breakthrough and Boca Juniors accepted Barcelona offer for the curly hair magician.

Diego Maradona moved to Barcelona and recorded his first goal in a 2-1 defeat against Valencia in September, 1982.

He continued to impress fans with his magician left leg and already scored six goals in 13 matches.

The Coach, Udo Lattek was however not impressed with the Argentina wonderkid and would rather refer to him as 'this kid'.

At times the Barcelona gergarious coach would assert his authority and due to the Argentine's attitude to time keeping has order the bus driver to drive off to an away fixture without their star Player.

In December 1982, Diego Maradona was diagnosed with hepatitis and Barcelona season started winding down and the return of the Argentine's collide with the sacking of Udo Lattek and Cesar Menotti took over.

Diego Maradona guide Barcelona to Copa del rey as they beat Real Madrid 2-1, he receive applause from both home fans and away fans in the Santiago Bernabue.

Diego Maradona Barcelona career end when he fought after numerous abuse on pitch by Atletic Bilbao players but could not take it again and fought Miguel Sosa which the Spanish FA gave him 3 month ban from Spanish football.

The Argentine's hero move to Napoli and couldn't complete his ban.