Chelsea have spent the same amount Man United spent on Harry Maguire but how have they done that and looked better in defence? 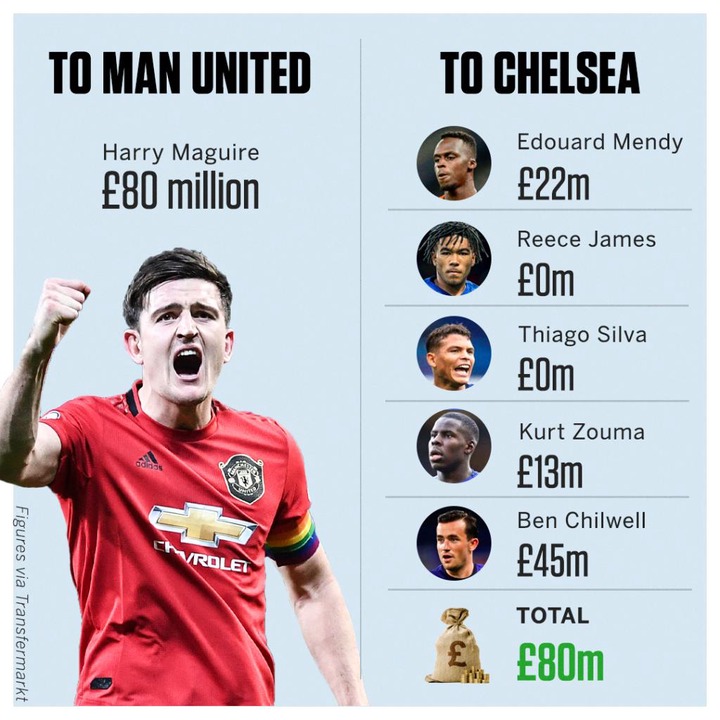 Chelsea have signed a new goalkeeper from Rennes to replace Kepa in goal and he has impressed in his first few games, the first step to their defence not looking shaky was to sign a new goalkeeper, they have looked composed when defending aerial balls. Their new defence consists of England youngsters Reece James and Ben Chillwell, Kurt Zouma and 36 year old Brazilian center back Thiago Silva. Reece James was promoted from Chelsea academy and cost them £0 while Thiago Silva also signed from PSG after not signing a new contract therefore was not bought and cost Chelsea £0 in the transfer market. Kurt Zouma cost Chelsea £13 million when he was bought while Ben Chillwell, the most expensive defender in the Chelsea back line cost them a whooping £35 million to secure his signature from Leicester City. Their new goalkeeper cost them £22 million to sign. The addition of these transfer fees equals how much Manchester United spent on Harry Maguire who many would agree has been disappointing. Chelsea have looked better in defence when these 5 players have started, not only have they kept clean sheets, they have also provided and scored goals. This season Kurt Zouma has 3 goals in the league in 7 appearances, Ben Chillwell has 2 goal and 2 assists in 5 appearances, Thiago Silva opened his record in Chelsea’s last match against Sheffield United while Reece James scored in their win against Brighton in their first match of the season. The money spent by Chelsea can be said to be wise as it is already showing results while United still continue to struggle at the back after splashing £80 million on Harry Maguire. Looking at the depth of their defence also, if any of these five players gets injured it doesn’t spell doom as they’ve both Andreas Christense and Antonio Rudiger as replacements for the two center backs while Cesar Azpilicueta and Marcos Alonso could also deputies for Reece James and Ben Chillwell respectively.

Content created and supplied by zankuteacher.Opera News is a free to use platform and the views and opinions expressed herein are solely those of the author and do not represent, reflect or express the views of Opera News. Any/all written content and images displayed are provided by the blogger/author, appear herein as submitted by the blogger/author and are unedited by Opera News. Opera News does not consent to nor does it condone the posting of any content that violates the rights (including the copyrights) of any third party, nor content that may malign, inter alia, any religion, ethnic group, organization, gender, company, or individual. Opera News furthermore does not condone the use of our platform for the purposes encouraging/endorsing hate speech, violation of human rights and/or utterances of a defamatory nature. If the content contained herein violates any of your rights, including those of copyright, and/or violates any the above mentioned factors, you are requested to immediately notify us using via the following email address [email protected] and/or report the article using the available reporting functionality built into our Platform. Read more>>