Biggest Winnings In Champions League Since 2007

Meanwhile, this year's champions league has a different dimension as the whole club that are featuring wishes to become champions for this season. The bigger team in Europe are really trashing the smaller clubs with heavy blow.

The table below, shows the biggest champions league winning in Europe since 2007

From the table, the biggest winning in 2007 is that of Manchester United and Roma. That season, the Manchester played with great zeal that is when they are still answering the red devils. They thrashed the Roma with -1. Like wise the Liverpool.

In the year 2016the Barcelona humiliated Celticwhich is also a Spanish team with a heavy blow of 7-0.

Currently last season, the Bayern Munich crowned it all by Dragging the name of the Barcelona to the mud by beating them with 8-2 the Barcelona has never been humiliated like this in their entire season since their existence as a club. 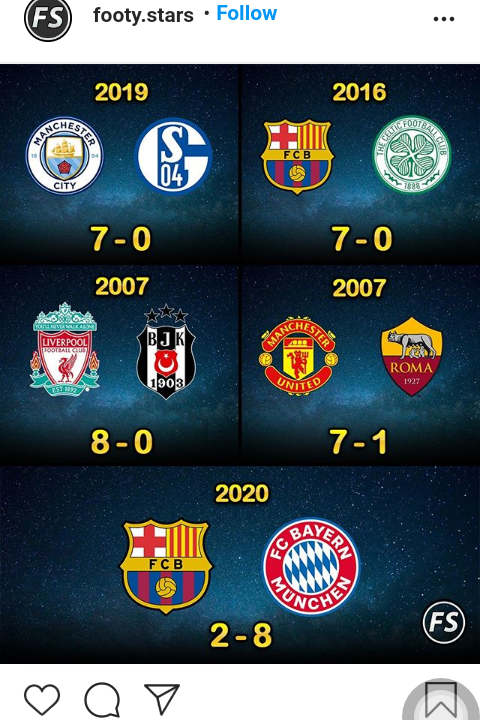 Content created and supplied by Sportsbet.Opera News is a free to use platform and the views and opinions expressed herein are solely those of the author and do not represent, reflect or express the views of Opera News. Any/all written content and images displayed are provided by the blogger/author, appear herein as submitted by the blogger/author and are unedited by Opera News. Opera News does not consent to nor does it condone the posting of any content that violates the rights (including the copyrights) of any third party, nor content that may malign, inter alia, any religion, ethnic group, organization, gender, company, or individual. Opera News furthermore does not condone the use of our platform for the purposes encouraging/endorsing hate speech, violation of human rights and/or utterances of a defamatory nature. If the content contained herein violates any of your rights, including those of copyright, and/or violates any the above mentioned factors, you are requested to immediately notify us using via the following email address [email protected] and/or report the article using the available reporting functionality built into our Platform. Read more>>