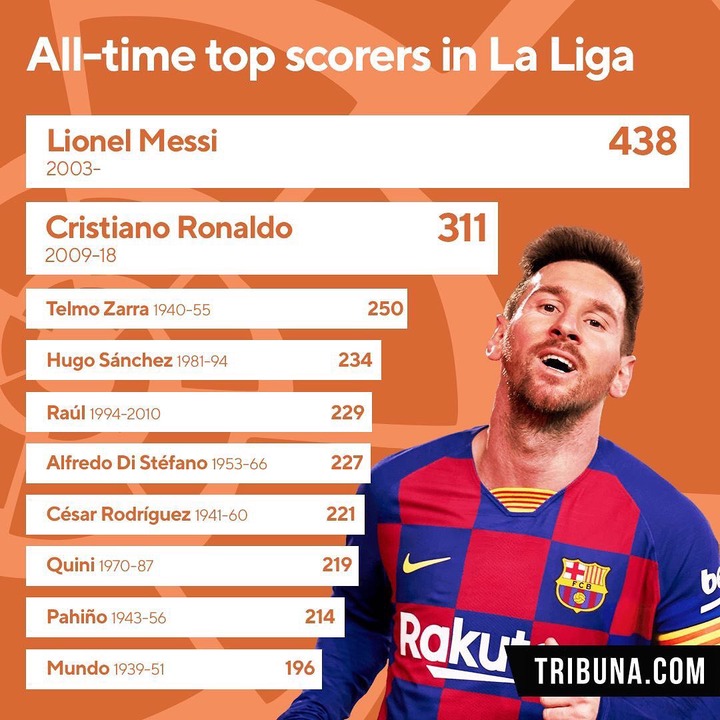 View pictures in App save up to 80% data. let us take a look at the top 10 goal scorers of all times in Laliga. However, La Liga, is the men's top professional football division of the Spanish football league system. Lots of great men has made great record so far from this league.

let's take a look at the players who scored the most goals.

The first ranked player is Lionel Messi. The 32 years old right footed player Lionel Andrés Messi Cuccittini is an Argentine professional footballer who plays as a forward and captains both Spanish club Barcelona and the Argentina national team. He has scored the most goals in Barcelona since 2013 with 438 goals.

The next player is Telmo Zarra, Pedro Telmo Zarraonandía Montoya, known as Telmo Zarra or simply Zarra, was a Spanish football forward. He spent the majority of his career at Athletic Bilbao, from 1940 to 1955, he scored a total goals of 250.

The next player is Hugo Sanchez, Hugo Sánchez Márquez is a Mexican retired professional footballer and manager, who played as a forward. A prolific goalscorer known for his spectacular strikes and volleys, Sánchez is widely regarded as the greatest Mexican footballer of all time, and one of the greatest players of his generation. He scored 234 goals during his career in Laliga league.

The next ranked player is Raul, Raúl González Blanco, known as Raúl, is a Spanish football manager and former player who played as a striker. He is the current manager of Real Madrid Castilla. He scored 229 goals during his career.