Abe broke the News: Trump once asked me,"If the US is attacked by China, Japan will not do anything"

Kyodo News: Trump said there is "unfairness" between Japan and the United States, Abe persuaded the new security law

According to news from Kyodo News on the 13th, Abe accepted an exclusive interview with Kyodo News on the 12th. During the interview, Abe revealed a lot of things that he did not know when he held a summit meeting with US President Trump during his tenure as Prime Minister of Japan. According to reports, Abe broke the news that Trump has repeatedly expressed dissatisfaction with the "Japan-US Security Treaty" and repeatedly emphasized that if the treaty is followed, the United States will have more responsibilities than Japan in the event of an emergency. "unfair".

Abe also told Kyodo News that in order to strengthen the Japan-US alliance, he continued to persuade Trump at that time. 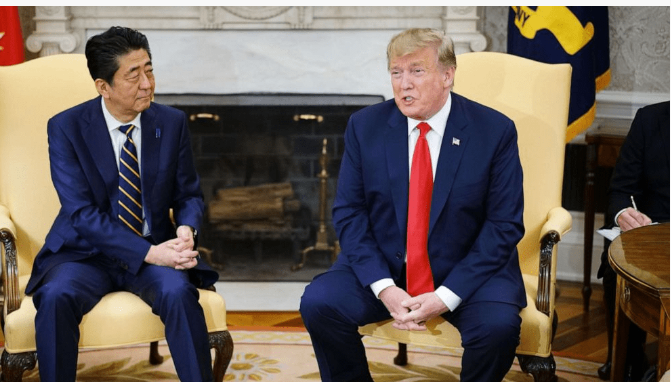 The report said that in order to appease Trump, Abe mentioned the new security law implemented by the Japanese government in 2016, which added controversial clauses such as lifting the ban on the exercise of the "self-defense collective right of self-defense".

Kyodo News Agency stated that Abe explained to Trump at the time: "I amended the interpretation of the constitution and implemented the (new) security law. For this reason, my cabinet approval rate has dropped by 10%."

According to reports, Trump said he was "convinced" and praised Abe: "You are a samurai."

In the interview, Abe also said that he "felt the challenge" because of Trump's dissatisfaction. He said: "This is also a common American idea. If you can't explain this, the (Japan-US) alliance will not be maintained."

According to previous reports by Japanese media, Japan’s Security Assurance-related Law (New Security Law) was formally implemented on March 29, 2016. The bill expands the scope of the Japanese Self-Defense Force’s mission, allows limited exercise of the “right of collective self-defense,” and protects US warships in peacetime. Provide "weapon and other protection".

Japan's "Asahi Shimbun" once reported that the implementation of the new security law was generally opposed by the Japanese people, and Abe's cabinet approval rate at that time also fell below 40%.

Kyodo News Agency mentioned that Abe did not mention the specific meeting where these contents took place. However, the report said that since November 2016, Abe and Trump have held a total of about 15 meetings, and the above content has not been made public before.

Content created and supplied by PoliticalPundit.Opera News is a free to use platform and the views and opinions expressed herein are solely those of the author and do not represent, reflect or express the views of Opera News. Any/all written content and images displayed are provided by the blogger/author, appear herein as submitted by the blogger/author and are unedited by Opera News. Opera News does not consent to nor does it condone the posting of any content that violates the rights (including the copyrights) of any third party, nor content that may malign, inter alia, any religion, ethnic group, organization, gender, company, or individual. Opera News furthermore does not condone the use of our platform for the purposes encouraging/endorsing hate speech, violation of human rights and/or utterances of a defamatory nature. If the content contained herein violates any of your rights, including those of copyright, and/or violates any the above mentioned factors, you are requested to immediately notify us using via the following email address [email protected] and/or report the article using the available reporting functionality built into our Platform. Read more>>