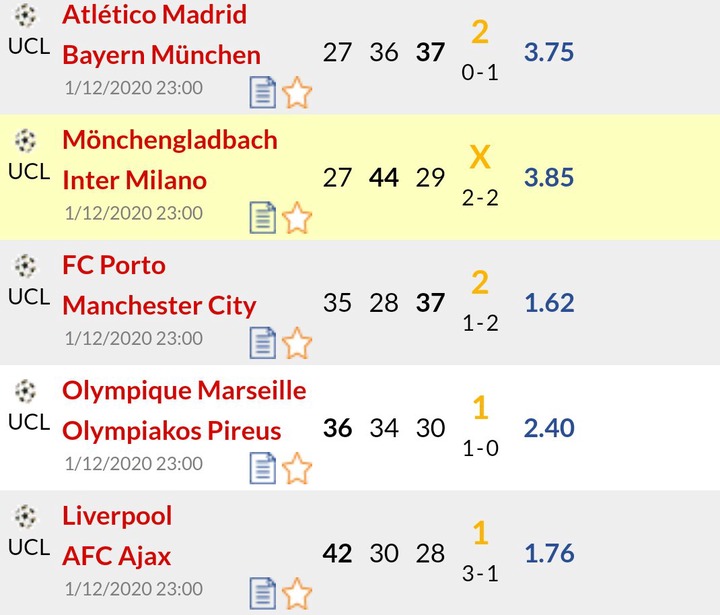 View pictures in App save up to 80% data. Welcome once again to my wall for the ultimate predictions. It's another great day where a number of teams have been paraded to play. The following are some of the teams and their predictions.

Position 2 and 1 respectively in Group A table. In their last head to head match, Bayern Munchen thrashed Atletico Madrid 4-0. According to the statistics, Bayern Munchen have better performance and can dominate in this match. Predict over 1.5 goals and Bayern Munchen to win.

Position 1 and 2 respectively in Group D Table. Liverpool won 1-0 in their last head to head match against Ajax. According to statistics, both teams are strong players and can fight for a win. However, Liverpool are much stronger than AFC Ajax. Predict Liverpool to win and total goals to be over 2.5.

Position 1 and 4 respectively in Group B Table. Their last head to head match ended a draw of 2-2. According to the statistics, both teams have the potential of scoring. Predict both teams to score and over 2.5 goals.

Position 4 and 3 respectively in Group C Table. In their last head to head match, Olympiakos Pireus won 1-0 against Olympique Marseille. According to the statistics, these teams don't score more than 2.5 goals in their matches. Predict Olympiakos Pireus to win and under 2.5 goals.

Content created and supplied by Michaelkilonzo97.Opera News is a free to use platform and the views and opinions expressed herein are solely those of the author and do not represent, reflect or express the views of Opera News. Any/all written content and images displayed are provided by the blogger/author, appear herein as submitted by the blogger/author and are unedited by Opera News. Opera News does not consent to nor does it condone the posting of any content that violates the rights (including the copyrights) of any third party, nor content that may malign, inter alia, any religion, ethnic group, organization, gender, company, or individual. Opera News furthermore does not condone the use of our platform for the purposes encouraging/endorsing hate speech, violation of human rights and/or utterances of a defamatory nature. If the content contained herein violates any of your rights, including those of copyright, and/or violates any the above mentioned factors, you are requested to immediately notify us using via the following email address [email protected] and/or report the article using the available reporting functionality built into our Platform. Read more>>