"If Jonathan were to be President now, all Mosques in the North will be cursing him" -Twitter user

The issue of insecurity in Nigeria today is giving everyone a sleepless night and most especially Northerners. People are being kidnapped, killed, injured almost in daily basis, yet no help seems to be coming on the side of the Government. Just yesterday, it was reported that 43 innocent farmers were behead in Borno State by suspected terrorists. Sometimes last week, it was also reported that suspected bandits blocked Kaduna-Abuja Road and kidnapped many and killed many aswell. 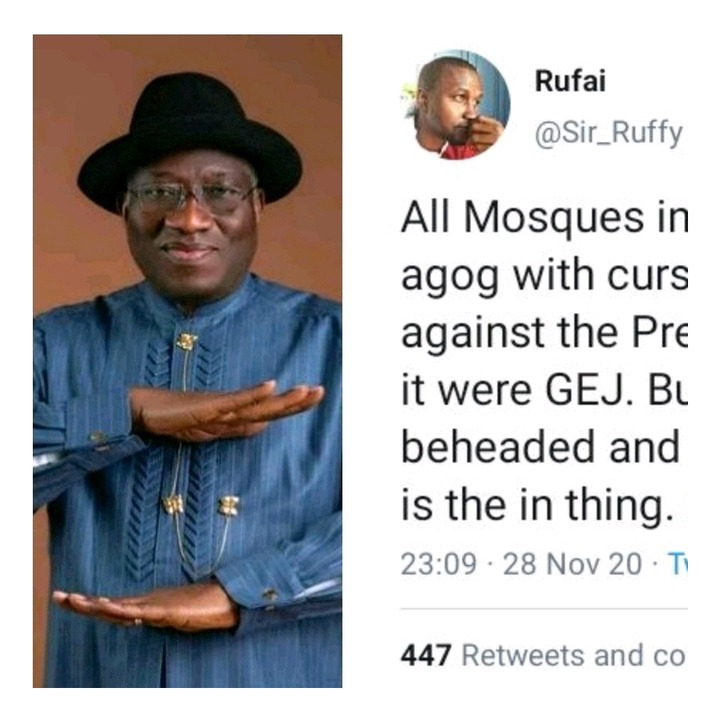 Based on that note, a twitter user with the username @Sir_Ruffy has decided to speak out as he blamed the Northerners for keeping silent. According to him, he made it clear that if former president Goodluck Jonathan were to be President now, all the mosques in the north will be cursing and praying against him by now. He ended by making it clear that 43 people were just headed, but Buhari seems to be doing nothing. 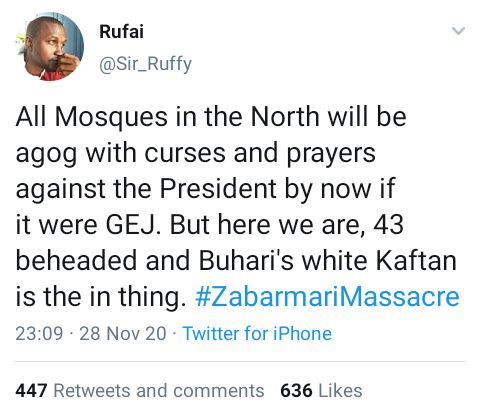 This young man has said it all. Let us learn how to speak up, no matter who is in power. If that is not done and fast, this fire probably will consume all of us. When Jonathan was the president, we had issues of insecurity, but it was never as bad as it is now, yet he was dragged, insulted and mocked. But now nobody seems to be talking. Let's stand up and speak out so that those in government will know that our life matters.

Content created and supplied by Ebukajp.Opera News is a free to use platform and the views and opinions expressed herein are solely those of the author and do not represent, reflect or express the views of Opera News. Any/all written content and images displayed are provided by the blogger/author, appear herein as submitted by the blogger/author and are unedited by Opera News. Opera News does not consent to nor does it condone the posting of any content that violates the rights (including the copyrights) of any third party, nor content that may malign, inter alia, any religion, ethnic group, organization, gender, company, or individual. Opera News furthermore does not condone the use of our platform for the purposes encouraging/endorsing hate speech, violation of human rights and/or utterances of a defamatory nature. If the content contained herein violates any of your rights, including those of copyright, and/or violates any the above mentioned factors, you are requested to immediately notify us using via the following email address [email protected] and/or report the article using the available reporting functionality built into our Platform. Read more>>