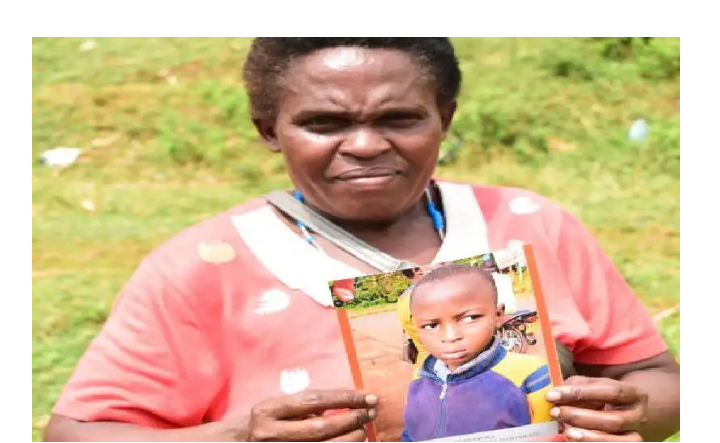 Elizabeth Musyoka holds a picture of her nine-year-old daughter Agnes who died on Saturday following severe injuries she suffered after being defiled.

Agnes Musyoka, a bubbly nine-year-old girl loved the outdoor; when not helping her mother, you wouldn’t miss her playing hide-and-seek with her friends.

Her innocent laughter would break the monotony at dusk, keeping her mother busy as she prepared the evening meal.

On Sunday, the little angel lost a three-day fight for her life at Kakamega County Hospital’s Intensive Care Unit.

But Agnes didn’t have to die. A beastly act by a teacher she knew as her tutor and protector ended her young life.

The suspect, an untrained teacher at a local private school in Kakamega town, is accused of preying on and defiling her on January 15.

The man was living in a rented house next to the victim’s home at Makaburini estate on the outskirts of Kakamega town.

Agnes’ death is a double tragedy to Elizabeth Musyoka, her mother, given her father, Raphael Musyoka, died on the day the girl was born in 2011.

Elizabeth said her daughter was discovered to have been defiled when her elder sister was bathing her.

According to her, Agnes was bleeding from her private parts, something that alarmed the sister.

“We asked her what had happened but she could only cry. Later she opened up saying the suspect warned her not to tell anyone about what he had done to her,” said Elizabeth.

She added: “She told me that the suspect had promised to give her Sh1,000 if she didn’t tell anyone about what had happened.”

Elizabeth later reported the matter to the police before taking her daughter to hospital, but the doctors and nurses strike complicated things.

“She did not receive medical attention due to the strike. My daughter could sleep during the day but scream at night complaining of chest, neck and stomach pain and persistent headache. We took her to several health facilities hoping she would get better. However, she was only given painkillers even as her condition deteriorated,” said the mother.

She said they hired a counsellor with the help of Groots Kenya, a non-governmental organisation, for her.

“We pushed for the arrest of the suspect and we are still following the case until justice is done,” says Emily Maranga, Groots Kenya officer in charge of gender-based violence. According to Elizabeth, her daughter prayed for her last Thursday at around 2pm and even predicted her death.

“When she had prayed for me, she requested me to pray for her and after the prayers, she bid me farewell. She closed her eyes and developed breathing complications. We rushed her to St Elizabeth Mukumu Hospital and then to Kakamega Referral Hospital where she was admitted to the ICU,” said Elizabeth.

She succumbed on Saturday afternoon.

The defilement incident was reported at Kakamega Central Police Station.

The suspect, Peter Abucheli, 36, was arrested and appeared in a Kakamega court where he was charged with defiling a minor and causing her grievous bodily harm.

The case will be heard on March 24, this year.

Kakamega Central Sub-county Commander David Kabena told The Standard yesterday that they could press more charges against the suspect based on the post-mortem examination report being awaited.

“If the post-mortem will reveal that the pupil’s death was as a result of the defilement incident, then we shall press murder charges against him,” Kabena said on phone.

Content created and supplied by @254KelvinMwiti.Opera News is a free to use platform and the views and opinions expressed herein are solely those of the author and do not represent, reflect or express the views of Opera News. Any/all written content and images displayed are provided by the blogger/author, appear herein as submitted by the blogger/author and are unedited by Opera News. Opera News does not consent to nor does it condone the posting of any content that violates the rights (including the copyrights) of any third party, nor content that may malign, inter alia, any religion, ethnic group, organization, gender, company, or individual. Opera News furthermore does not condone the use of our platform for the purposes encouraging/endorsing hate speech, violation of human rights and/or utterances of a defamatory nature. If the content contained herein violates any of your rights, including those of copyright, and/or violates any the above mentioned factors, you are requested to immediately notify us using via the following email address [email protected] and/or report the article using the available reporting functionality built into our Platform. Read more>>