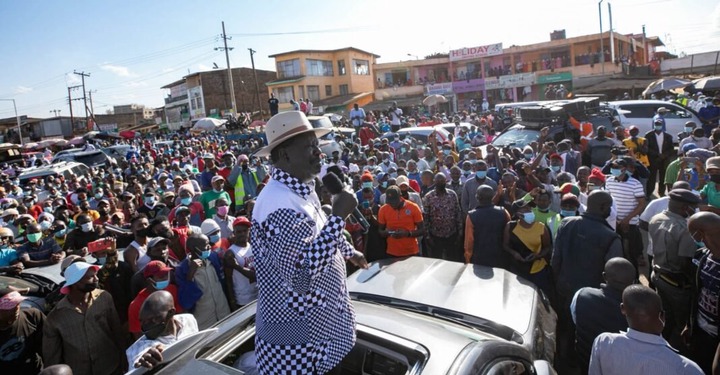 Raila Odinga caused political earthquake during his tour of mount Kenya and now William Ruto’s allies from the region are in a panic mode.

The DP allies from mount Kenya had been perpetrating Railaphobia and creating the notion that the former Prime Minister is not welcomed in the region.

However, on Sunday and Monday Raila pulled mammoth crowds during his rallies in different towns in Nyeri, Murang’a and Kiambu counties.

In some instances, Raila’s convoy was blocked by residents who demanded him to address them.

On Tuesday Raila got another major boost in his State House bid after an elite team of Mount Kenya billionaires said they will back his quest.

The elite group popularly known as Mount Kenya Foundation said it had been tasked by President Uhuru Kenyatta to present a name of a possible candidate to take over from him when he retires in August next year.

Raila’s successful visit to Mount Kenya and the endorsement by Mount Kenya Foundation is causing sleepless nights in Ruto’s camp.

“Dear Mt Kenya Foundation. You have finally declared it’s Raila for president. Unfortunately, you are apolitical hence, you do not represent the views of the people from Mt Kenya region. So statements like “our people” are inappropriate in such committments.
Today, you promised someone our votes including mine? Noooo…….
Since you claim to speak for “US”
Did you speak for the small traders in Githurai and Kahawa West when they LOST LIVES and properties to demolishers? Did you speak when our people in Laikipia were sleeping in the cold and their animals stolen by rustlers? So you only speak when brokering power?
You can afford to spend over 2 million shillings to plan a billionares club forum to promise someone “our ” votes yet you could not send a truck of foods and clothes to our Laikipia Kinsmen. Interestingly, someone was on Ziesta all through….
He was too bored to keep awake PWAAAH! I think he knew they were lying to him. Just as the Media Guru recently and openly shared in Gatanga…..so he dozed off!
As for me, a tinga presidency is a force down a throat of an already constipated belly! Am Not boarding!” Wamuchomba wrote.

Murang’a senator Irungu Kang’ata whose county accorded Raila a warm welcome during his visit has asked residents to register as voters in big numbers and vote for Ruto instead.

Kapseret MP Oscar Sudi reportedly advised Ruto to dismiss his allies from Mount Kenya. It was alleged that Sudi was furious after Raila stormed Mount Kenya holding massive rallies against assumptions that he was not welcomed in the region.

However, Sudi came out to dismiss the report that he was furious at Ruto’s allies from Mt. Kenya for misleading him.

Kindiki questioned why ODM/Jubilee coalition agreement had not been implemented and angry Kenyans told him to focus on UDA matters instead.

Ruto ally Dennis Itumbi had earlier claimed that Raila was accorded warm reception in Mount Kenya because he didn’t criticize the DP.

1. None of them spoke anything against @UDAKenya, Wheelbarrow, Hustler or Hustler-In-Chief. You knew what NOT to touch.

2. None of you asked the People to vote Baba.