Musinga says one Mr Kiptoo arrived to collect the second batch under police escort, driving a Range Rover with stickers of Parliament and DP's office. 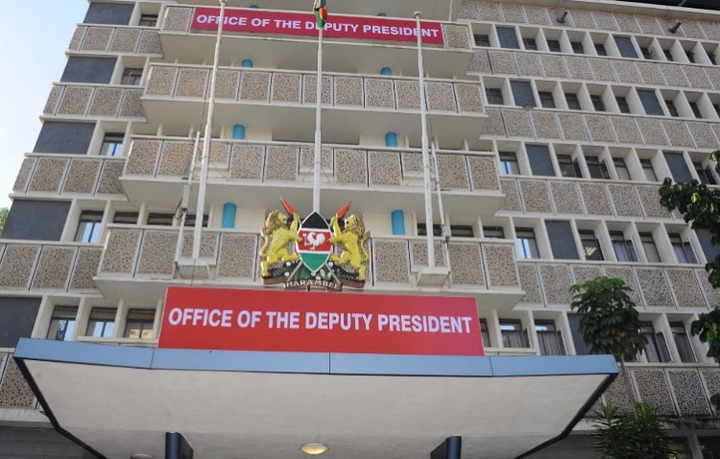 A director of a firm at the centre of a fake laptop tender at Deputy President William Ruto’s office has told court he was cheated into believing the deal was genuine.

Charles Musinga of Makindu Motors said a woman introduced to him as Miss Muhoro by a friend he identified as Augustine Matata, was to facilitate the tender at the DP’s office. They were to supply 2,800 laptops.

“Miss Muhoro also said she was the secretary of a Mr Wanyonyi who was the personal assistant to the Deputy President,” Musinga told court.

He told chief magistrate Martha Mutuku that Muhoro would later arrange a meeting in her office at Harambee House Annex to pursue the supply tender.

Musinga testified on Thursday in a case in which seven people have been charged with a fake laptop tender. The suspects are Allan Chesang'; Teddy Owiti; Kevin Nyongesa; Augustine Matata; Joy Kamau; James Makokha, alias Mr Wanyonyi; and Johan Osore.

On May 30, 2018, Musinga, Matata and a third man only identified as Solomon drove and arrived at Harambee Avenue at 8 am. They parked their car and sat waiting at a Java House outlet next to Harambee House Annexe as Muhoro had instructed. They were to wait for her call.

The call came and they were led into Harambee House Annex via the VIP lift. They landed on the third floor. Musinga said a fake business deal was the last thing that could cross his mind, least of all being engineered at the DP's office.

They found Miss Muhoro seated and she confirmed his firm had been shortlisted to supply laptops to the Ministry of Devolution. She even handed them non-disclosure agreement forms. They were barred from discussing the deal with anyone.

Musinga said his confidence got a boost by virtue of getting into Harambee House Annex. They would later meet Miss Muhoro at a hotel in Karen, which he says he was informed belonged to Jubilee secretary general Raphael Tuju.

On June 19, they met with her again, but this time, she was with her “boss Wanyonyi” at Ole Sereni Hotel where she gave them a local purchase order that indicated they were to supply 2,800 laptops.

They found a supplier and the first batch of 145 laptops they were informed by Miss Muhoro to supply at the Treasury Building.

“We were flagged by uniformed police and when they enquired we told them we were bringing the DP's laptops and they said they were aware, and let us through…We uploaded the goods and there were uniformed policemen to confirm the order,” he said.

They later went to the 8th floor at the Ministry of Devolution where they met Christian Mwendwa who signed the delivery order. Given that they could not get more laptops of HP 7th generation, they requested that they supply an alternative. The request was accepted.

They supplied the second batch of 587 pieces, which they were told to take to Eastleigh at their offices where they were informed a “Mr Kiptoo, who was also a DP Ruto's aide", collect the consignment.

According to the prosecution, Kiptoo is Allan Chesang—the first accused person in the case. The court heard that Kiptoo, alias Chesang, went under police escort, driving a state-of-the-art Range Rover with stickers of Parliament and the Office of the Deputy President.

Chesang also collected the third batch of 500 laptops and the fourth batch of 620 through the same method.

After delivering all the pieces, Miss Muhoro invited them with the chairman, Mr Wanyonyi, at Ole Sereni and told them they had done a good job and they would land another tender to supply ambulances.

Musinga will be cross-examined on February 15.

In December, businessman Stephen Ngei Musyoka, the other director of Makindu Motors, told magistrate Mutuku that he, alongside his co-director, received an email from the Office of the DP confirming that they had won the tender.

He told the court he lost Sh181 million.

“My co-director Charles and I received an email from the Office of the DP confirming that they had received our profile and were ready to work with us in the year 2019-20 for the supply of laptops as direct sourcing to the Ministry of Devolution,” he said.

Two representatives of Makindu Motors were invited to the Office of the DP for a meeting to finalise the deal. They were ushered in by one Mr Osore—one of the accused persons.

The two signed a non-disclosure agreement that had the official logo of the Office of the DP. Musyoka said they later had a meeting in Karen with two of the accused persons—Matata and Wangare, who introduced herself as Miss Muhoro and a procurement officer at the Office of the DP.