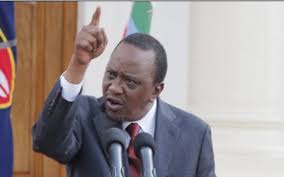 View pictures in App save up to 80% data. President Uhuru Kenyatta has dumped some of former powerful leaders who helped him craft the government in 2013 and 2017. According to reports by the standard newspaper. President Uhuru has Stopped giving space to his Former Allies at statehouse. Those who used to advise and handle most of his business are now left in limbo, not a where of his next move.

It is reported that, one of the people who have been dropped is his nephew Jomo. It is Claimed that president Kenyatta has reduced his interactions with Jomo who was seen as the personal assistant to the president for a long time.

It is claimed that Uhuru has invested his trust in orange democratic party leader and he is ready to do things his way. It's alleged that Raila is currently calling shots in Uhuru's administration unlike before when he was opposing the government. The report by the standard goes further to reveal that, even those people who were deemed powerful and most trusted by the president are nolonger part of his team. This includes Heath cabinet Secretary Mutahi who was seen as the closest ally to Kenyatta.