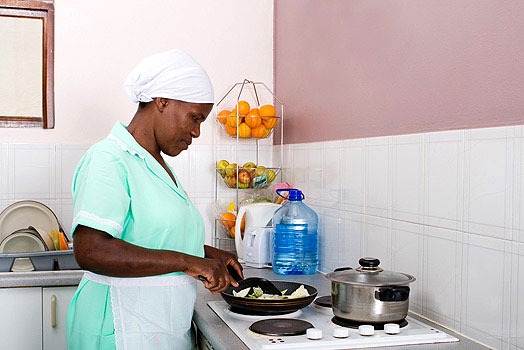 View pictures in App save up to 80% data. It is illegal to fire your househelp without giving her notice and paying her a salary of not less than Ksh. 10,000, Employment and Labour Relations Court, has ruled.

Justice Nduma Nderi says to fire a house employee you have to give her notice and pay her terminal fees when he or she departs. In addition a househelp should be given a certificate of service from the employer before he or she departs.

“It is unlawful to terminate the employment of a house help without giving her notice. It is also illegal and unfair labour practice to send a house help away without paying her any terminal benefits and not giving her certificate of service,” Nderi is quoted by the Standard.

This means to fire an employee you have to give them a one-month notice and also pay her one month salary in lieu of notice.

Judge Nderi made the ruling during a case in which a house help, Moreen Muhani sued her employer Namuben Manji Bhinji for unlawful termination of her contract in 2015, she was earning a monthly salary of Ksh. 3,000.

In a landmark ruling, the court awarded Muhani a compensation of Ksh. 270,964 for unprocedural termination of her contract by Manji. The former employer will have to pay the humongous amount of compensation.

This landmark ruling is likely to change how employees treat their househelps going forward as any form of mistreatment or unfair termination of a contract could lead to expensive legal suits.

Content created and supplied by AyodiK.Opera News is a free to use platform and the views and opinions expressed herein are solely those of the author and do not represent, reflect or express the views of Opera News. Any/all written content and images displayed are provided by the blogger/author, appear herein as submitted by the blogger/author and are unedited by Opera News. Opera News does not consent to nor does it condone the posting of any content that violates the rights (including the copyrights) of any third party, nor content that may malign, inter alia, any religion, ethnic group, organization, gender, company, or individual. Opera News furthermore does not condone the use of our platform for the purposes encouraging/endorsing hate speech, violation of human rights and/or utterances of a defamatory nature. If the content contained herein violates any of your rights, including those of copyright, and/or violates any the above mentioned factors, you are requested to immediately notify us using via the following email address [email protected] and/or report the article using the available reporting functionality built into our Platform. Read more>>
Latest news

2 gifts that will make a woman love you

KPLC Announces a Long Electricity Blackout on Thursday October 22, Check if You Will be Affected

This is the reason why Google terminated comedian Flaqo's YouTube Channel

Why Schools May Be Closed Before 2nd Of November 2020

If your Husband is Not at Home Tonight, Please Don't Do These 3 Things

If You Find This In The Wall, Don't Touch Or Pick It

Here is the Rich tycoon who married Massawe Japanni.

Roselyn Akombe Strikes Again, Alleges Uhuru and Ruto are Secretly Working Together for This Reason

No Hopes For KCPE And KCSE Exams In 2021- Opinion

Furlough scheme: How to protect your finances from a ‘huge shock’ as support ends

Tasmania is hoping locals will fill the void left by seasonal workers - but will they?

After Teachers Test Positive For Covid-19, This Is What Learners Are Going To Do

Ways Nigerian Youths Have Taken The #EndSARS Protest To Another Level

Uhuru expected to Clarify the Uncertainty Surrounding re-opening of Schools

Trump administration sued over decision that could cut wages for more than 200,000 farm workers

10 Best Jobs Where You Can Work From Home.

How to deal with unfair labour practices

How remote work has changed discussing politics in the office

A Great Dilemma Between Full Reopening Of Schools And Closing Schools

‘It drove us to innovate’: Startek explains Kingston work-from-home transition

UIF Ters update: To all not paid employees from March to date.