Will Kalonzo deputise Raila? Allies threaten to abandon him if he does so 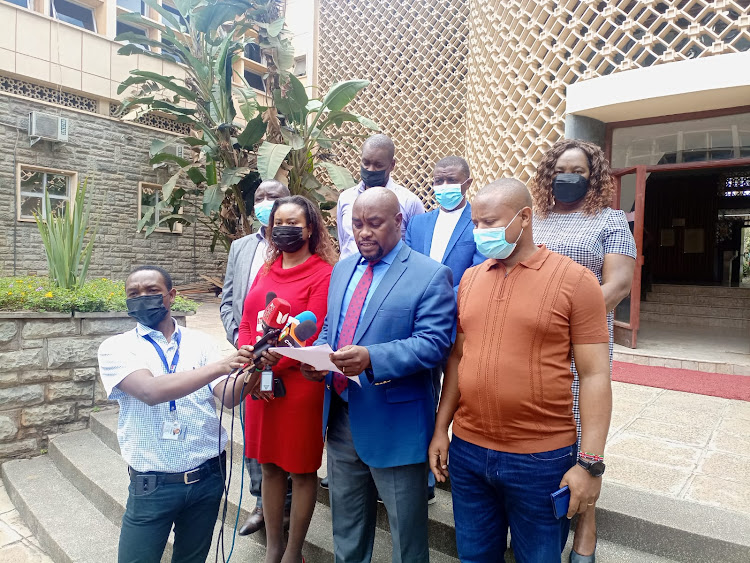 The threats triggered speculation that the two leaders could be plotting a reunion to face Deputy President William Ruto on a joint ticket.

In a harsh statement issued at Parliament Buildings, Wiper MPs, led by Kitui Senator Enoch Wambua, warned Kalonzo against any plans to support Raila. They said he would be a lonely man on such a journey.

“Should our party leader ever make the decision to support the Rt Hon Raila Amolo Odinga for the presidency, we respectfully assure him of two very painful outcomes,” they said in a statement read by Wambua.

The MPs said they will not only abandon Kalonzo, but his Kamba community and other supporters across the country will "never forgive him”.

It was not immediately clear if Kalonzo and Raila are in talks.

Curiously, the statement came a day after ANC leader Musalia Mudavadi said he could pick a running mate from Mt Kenya.

Musalia is a principal in One Kenya Alliance alongside Kalonzo, Kanu leader Gideon Moi and their Ford Kenya counterpart Moses Wetang'ula.

And in what further cast doubt on the togetherness of the OKA principals, it emerged that Gideon could have changed his mind and was considering going for the top seat.

However, Kalonzo’s lieutenants refuted any talks between him and Raila, saying they want to "put to rest the wild speculation" that their party leader was considering deputising Raila in 2022.

“What we are saying is that our people are saying that Kalonzo cannot support Raila again. We can support any other person within OKA but not Raila,” Wambua said.

The leaders said the Kamba nation was firmly behind OKA and persuaded the principals to reject any plot to divide them.

“Encourage our principals to stand firmly together and fight off any attempt, explicit and or veiled by any person to divide them,” the statement reads.

Mulu said such an arrangement would mean "doing the same thing the same way and expect a different result".

“What our people are saying is that they don’t have anything personal with Raila, but what they are saying they have supported Raila two times but nothing has happened,” Mulu said.

Kalonzo was Raila’s running mate in the 2013 and 2017 general elections.  President Uhuru Kenyatta was declared the winner on both occasions.

In June, Kalonzo said he would not support Raila again in 2022. He said doing so would render him the "most stupid" person on earth.

“For me, as of now, it is unthinkable that I, Stephen Kalonzo Musyoka, would support Raila Odinga for the third time…. I would be the most stupid fellow on earth to go and support—for the third time—a presidential candidate without a measure of reciprocity,” the Wiper leader said.

However, there have been reports of efforts by the President to reunite the former Nasa bosses and persuade them to form one political vehicle to face Ruto.

Uhuru has fallen out with Ruto. Reports indicate he has settled on Raila as his preferred successor.

The President has held two closed meetings with Raila and the OKA chiefs at State House, Mombasa, in what was seen as an attempt to persuade them to support Raila.

But OKA principals have dismissed engaging in succession talks with the President or being coerced by the head of state to back the former Prime Minister.