Tough Life for Families as Covid-19 Wipes Out 1.7m Jobs

Number of unemployed increased to 4.6m between April and June compared to 2.3m 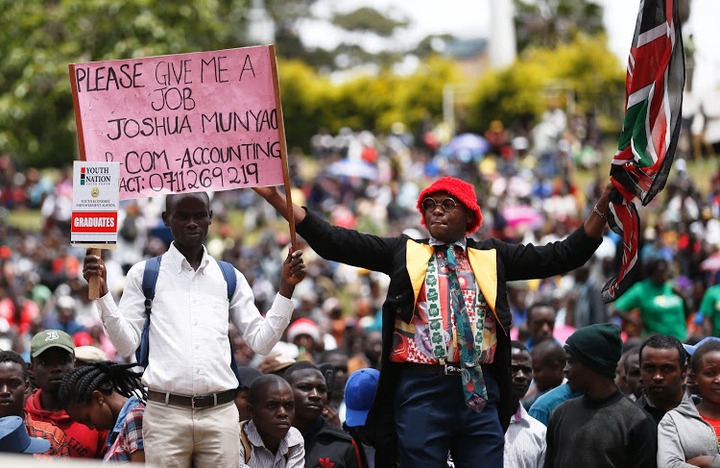 Every evening Jared Omedo piles cabbages and tomatoes into the boot of his car and heads to Kangemi market.

He joins other traders selling groceries, clothes and household items as they compete for customers. Business is slow. Not much cash changes hands.

On average, Omedo makes Sh250 a day, just enough to keep his family going. This is a new life for Omedo. And it is tough.

In April, Omedo found himself jobless after 17 years working in several five-star hotels. In his last job, he took home Sh130,000 monthly.

“It is extremely tough. Pandemics have come and gone but none has been severe like the coronavirus. It has not only stripped me of my dignity but also killed my dreams for a better retirement some day,” Omedo told the Star.

Omedo is among 1.7 million Kenyans who have lost their jobs due to the coronavirus pandemic. The virus has infected 25.3 million people globally, killing close to a million.

Virus containments measures including lockdowns, travel restrictions and a ban on public gatherings have ravaged the economy.

Companies have had to adapt to survive. They sacked hundreds of thousands of workers. Reports by several state and private organisations attest to this.

A Kenya National Bureau of Statistics report shows that the rate of joblessness doubled between April and June to 10.4 per cent from 5.2 per cent in the same period last year.

KNBS’second quarter Labour Force Report shows the number of unemployed increased to 4,637,164 between April and June compared to 2,329,176 in the same period last year.

Just as in the previous quarters, persons in the age group 15 to 19 years recorded the lowest economic participation rate at 25.2 per cent.

About 50,000 graduates leave public and private universities in Kenya every year. The fresh job seekers pile onto the number of unemployed youths, estimated at 2.3 million, the Ministry of Education says.

The latest data by KNBS shows the number of those entering the job market hit 17,712,275 in April to June. This number represents 66.3 per cent of the total population aged between 15 and 63 years.

The economic strain brought about by the coronavirus has further suppressed employment hopes for graduating students. It worsens a bad situation as a recent study indicates that it takes a university graduate at least five years to secure a job.

The long-term unemployment rate was 3.1 per cent, which was higher than the two per cent recorded in the first quarter of the year.

Long-term job hunting, also called tarmacking, was also higher compared to the rate in the same quarter in 2019. Youths aged between 20 and 24 had the highest rate of long-term unemployment at 7.9 per cent.

The survey further revealed the overall employment to population ratio in the country, for the working-age population was 57.7 per cent in the quarter compared to 64.4 per cent recorded in the first quarter of 2020. This was a decline of 8.8 per cent from what was recorded in the same quarter in 2019.

The government’s data on the effects of Covid-19 on the economy, specifically the labour market, mirrors another one by the Federation of Kenya Employers. FKE said in May that the majority of its members had lined up redundancies.

“In a bid to remain afloat and continue providing services, some employers have to send their staff home while others have subjected them to pay cuts as high as 50 per cent following a dip in revenues," FKE boss Jacqueline Mugo said.

Jobs listing site BrighterMonday in a May report said adverts had dropped by 58 per cent across four months following the coronavirus outbreak.

“The Covid-19 pandemic has hit the employment sector hard across the world with job losses being recorded in millions. There has been a drop in the number of jobs advertised on BrighterMonday and other job aggregators,” BrighterMonday Kenya CEO Emmanuel Mutuma said.

Job listings in hospitality and travel, building and architecture industries were the worst hit, dropping by 47 and 75 per cent, respectively. The massive decline was caused by virus mitigation measures including bans on travel and public gatherings.

President Uhuru Kenyatta during his Labour Day address warned that more than  half a million Kenyans could lose their jobs in the next six months due to the Covid-19 pandemic.

Uhuru had earlier extended 100 per cent income tax relief for earnings below Sh28,000 per month as a measure to support low-income earners.

The high unemployment level is, however. a global concern.

It indicated that underemployment was bound to happen on a large scale, as the economic consequences of the virus outbreak translate into reductions in working hours and wages.

It added that self-employment in developing countries, which often serves to cushion the impact of changes, may not do so this time because of restrictions on the movement of people.

Working poverty is expected to increase significantly."The the strain on incomes resulting from the decline in economic activity will devastate workers close to or below the poverty line,”the ILO said.

“The ILO estimates that between 8.8 and 35 million additional people will be in working poverty worldwide, compared to the original estimate for 2020, which projected a decline of 14 million worldwide," the ILO said in a survey.

For people like Omedo, the opening of the economy and gradual revival of the tourism industry brings much hope.

The future isn’t very bright, but activity in the hospitality industry, albeit with new restrictions, is welcome.