Uhuru Sets The Record Straight About His 2022 Succession, Reacts on DP Ruto and Raila Recent Meetings 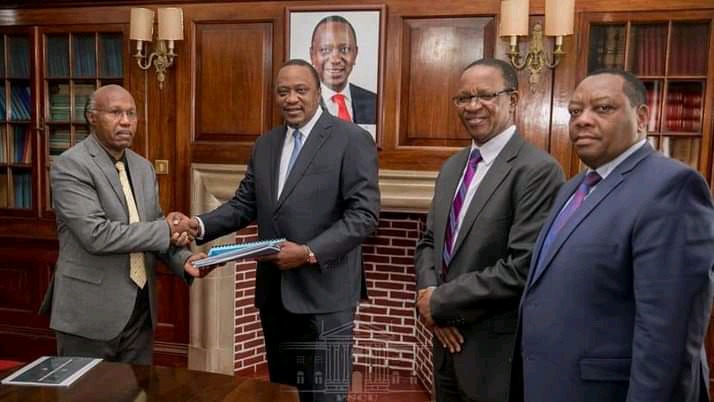 View pictures in App save up to 80% data. President Uhuru Kenyatta has set the record straight about his 2022 succession reacting on Deputy President William Ruto and former Prime Minister Raila Odinga meetings with a section of Mt Kenya leaders.

In a report by Inooro Tv, President Uhuru Kenyatta has been recorded thanking Mt Kenya leaders for their continued support more especially ensuring there is unity in the region.

The Head of State has reminded the leaders from his backyard about the promises he made while with them at the Sagana state lounge meeting informing them on the need to handle every lot that was discussed with care to avoid a bad end.

Uhuru has commented on the recent political meetings between Mt Kenya leaders and DP Ruto, Raila Odinga informing his stand.

The President has said that he doesn't stop any leader from holding a political meeting that is meant to benefit his region and that he can not condemn anyone.

"Good People, I wish to thank all of you for your continued support and the quest to have a united region. When we met, we agreed that these things must be handled with a lot of care, we won't rush for these things, even though I haven't condemned those who are meeting various leaders," Uhuru said.

Informing about the 2022 succession, the President has set the record straight stating that Kenyans should not be misguided in claims that he has settled on Raila Odinga or want to betray DP Ruto explaining that he has not endorsed any leader as his successor.

"But, I have endorsed nobody, please ignore the rumors, " Uhuru added in Kikuyu. Content created and supplied by kagane_ke.Opera News is a free to use platform and the views and opinions expressed herein are solely those of the author and do not represent, reflect or express the views of Opera News. Any/all written content and images displayed are provided by the blogger/author, appear herein as submitted by the blogger/author and are unedited by Opera News. Opera News does not consent to nor does it condone the posting of any content that violates the rights (including the copyrights) of any third party, nor content that may malign, inter alia, any religion, ethnic group, organization, gender, company, or individual. Opera News furthermore does not condone the use of our platform for the purposes encouraging/endorsing hate speech, violation of human rights and/or utterances of a defamatory nature. If the content contained herein violates any of your rights, including those of copyright, and/or violates any the above mentioned factors, you are requested to immediately notify us using via the following email address [email protected] and/or report the article using the available reporting functionality built into our Platform. Read more>>