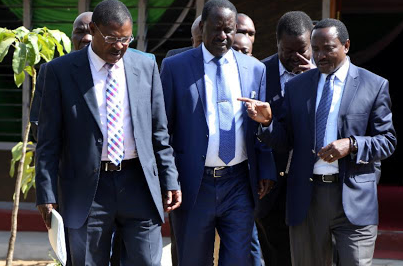 A new twist has emerged after Amani National Congress leader Musalia Mudavadi hinted of bringing on board ODM supremo Raila Odinga in the bid to form a 'muscular' alliance towards next year's general elections.

A report by the Standard affirms that Mudavadi who is a member of the One Kenya Alliance was open to work with the Former prime minister, a move that will leave President Uhuru Kenyatta in limbo as he seeks the best candidate to succeed him.

In an interview with the Standard yesterday, Mudavadi stated that their newly unveiled alliance that comprises of him, Kalonzo Musyoka (Wiper), Gideon Moi (Kanu) and Moses Wetangula (Ford Kenya) was determined to address the issues affecting the common citizen. “This is an emerging conversation, and if Raila Odinga feels that this is a conversation he buys in to, we have no problem working with him..." said Mudavadi.

He went on to state that the alliance was not formed for any personal gain, and Raila was welcomed if he denounces his personal interests on the cost of other leaders.

“But let’s try and divorce it from the personality cult. What I have always told Kenyans is, can we grow out of a personality cult and start talking about issues. If you share our ideals, you are most welcome.” he added.

Mudavadi went on to add that their alliance was all-inclusive, and urged Kenyans to be part of it and also buy its visions of creating jobs among other benefits if they pull the win in 2022.

“The formation is an emerging process. We want to have an economy that works for all Kenyans. We want to create jobs. We are going to seek out other leaders from across the country,” he added.