Detectives from the director of criminal investigations have arrested a woman who is reported to have faked his abduction in order to find some alone time with his boyfriend.

According to the reports given by the directorate of criminal investigations, it has been revealed that the suspect who has been identified as Jane Wairimu Ndung'u allegedly went missing on September 17th leaving her husband worried.

A few hours after his mysterious dissappearance, her husband who has been identified as Brian Mutuku allegedly received a phone Call from the woman's abductors demanding ksh. 200k ib order for them to release her.

Mutuku would later take ksh. 17k from his savings account which he immediately sent to the suspects after which he reported the incident to the directorate of criminal investigations in Embakasi prompting the officers to launch a search for the missing woman.

After reporting the incident to Embakasi DCIs, Mutuku called upon his friends and family members wanting them to help her raise some money where they raised ksh. 40k which they sent to the suspects who by now were being tracked by the directorate of criminal investigations.

A few hours later, the woman along with her new boyfriend were allegedly found along with another campus girl who they were living with under one roof after which they were arrested and taken to the police station for more investigation and questioning.

Reports given by the directorate of criminal investigations have revealed that the suspect was enjoying herself with her husband's money. When asked why she did it, Jane claimed that she faked her abduction in order to get away from her lendors who were after her.

DCIs who recorded their statement revealed that they are currently being held in Embakasi police station waiting to be charged with obtaining money through false pretense. 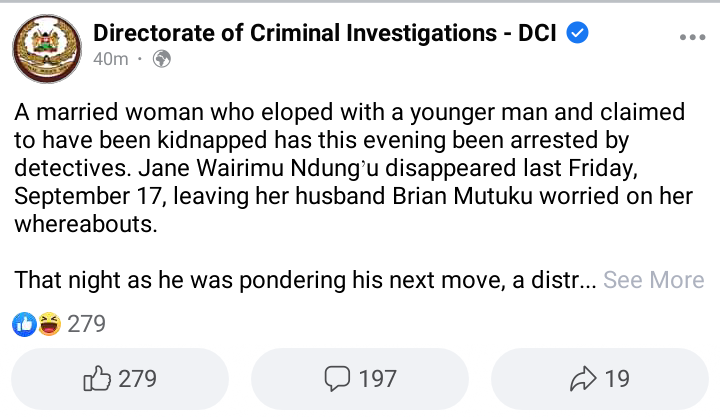