With the likelihood of a split in Central, the battle for the two regions' votes is a big factor in 2022 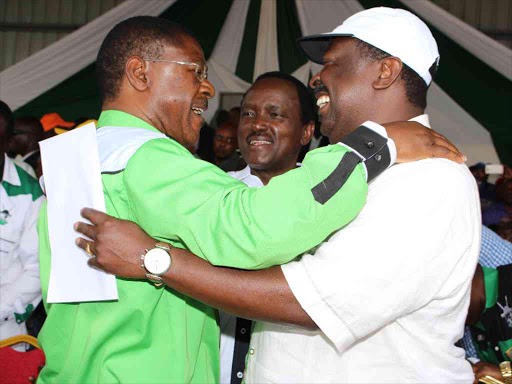 The Ukambani and Western voting blocs will be key factors in the presidential race between Deputy President William Ruto and ODM leader Raila Odinga.

The two regions are emerging as the new battlefronts in a scenario that may play out if the Building Bridges Initiative yields a referendum.

It is unknown if Wiper leader Kalonzo Musyoka and ANC boss Musalia Mudavadi will run on their own in the race to succeed President Uhuru Kenyatta.

A recent meeting between the two at a Nairobi hotel, together with former deputy speaker Farah Maalim, has sparked talk of a pact.

The uncertainty of their bids has made it difficult to project how voters from the regions will align themselves , as well as in which new territories the two leaders will make inroads.

It is also getting clearer by the day that Central may not vote in one basket in the polls.

Mt Kenya is split into factions backing Ruto and Raila, shifting the battlegrounds for the next vote to Western and Ukambani.

About one million votes are up for grabs in Ukambani, while Western, from 2017 poll data, has about 1.4 million voters.

Raila has not officially declared he’ll be in the race for president but his activities indicate that he will.

The ODM leader is being urged on by a section of Mt Kenya leaders, saying they fear their business interests would not be secured under a Ruto government. Many Kikuyu elders too support a pact with the Luo and have invited Raila to Nyeri.

Starehe MP Maina Kamanda made the clarion call in Bondo last Saturday, saying he "would be disappointed if Raila fails to vie for President".

The lawmaker gave the strongest signal of a pact with the ODM leader when he said there was no way they would travel to Kango Ka Jaramogi for nothing.

“We know where the country is going but because the handshake principals have asked us not to talk about 2022, you (Raila) will disappoint me if you will not be a presidential candidate.”

Mt Kenya leaders allied to former Gatanga MP Peter Kenneth appear to be keen on making the succession race too spiced up for Raila to resist. Kenneth is tipped for a crucial role.

The number of eligible voters in Mt Kenya is projected to increase to 5.9 million, while Rift Valley – where DP Ruto has a tight grip - will have about 4.2 million, including votes from cosmopolitan Nakuru.

The next election's focus has shifted from the two regions - Mt Kenya and Rift Valley - that were instrumental in President Kenyatta’s 2017 victory.

Eyes are on the Kalonzo and Musalia bases, now considered key to provide the votes that would tilt the scales.

Ruto has made numerous trips to Western to outbox Raila from what was once his (the former PM's) assured support base.

The DP is also trying his hand at the Coast region - largely under Raila’s grip. He has backed an independent candidate facing off with a Raila man in the Msambweni MP by-election on December 15.

Political observers say the next election will be a contest between the hustlers versus those perceived to represent dynasties.

Lawyer Danstan Omari says the scenario, therefore, renders Musalia and Kalonzo irrelevant, adding that they have no clout to lay any serious claim in 2022.

He holds that if the Ruto slogan of wheelbarrows and mkokoteni succeeds, then there would be no constituencies called Luhya and Ukambani.

“There will be two constituencies – hustlers and dynasties. Kalonzo is not a wheelbarrow man or dynasty. The only person who will matter is a hustler on one side,” Omari told the Star Siasa.

Ruto will not take a dynasty running mate but someone who captures the wheelbarrow slogan and imagination. He may dangle a carrot for women voters by picking a woman for Deputy President.

This, he explains, could be the reason he is pushing Malindi MP Aisha Jumwa strongly, a combination that is projected to deliver the gender vote, though Jumwa faces legal problems.

“Are we likely to see a woman running mate? Is Raila, like Joe Biden, likely to nominate a lady to challenge the wheelbarrow narrative? That would then mean Kalonzo and Musalia will be in the political obituaries,” Omari said.

In Western, Raila has lined up Kakamega Governor Wycliffe Oparanya to challenge Musalia; there is also the constituency of Bungoma Senator Moses Wetang’ula.

Omari says the region will, therefore, only change the matrix if Musalia is a running mate.

“At the moment, the whole of Western is gravitating towards Raila or Ruto. There is no mention of Musalia.”

Raila, on the other hand, appears to be reaching out to Kitui Governor Charity Ngilu. Machakos Governor Alfred Mutua, leader of the MCC party, is also gaining traction after he declared his presidential bid.

With the changing matrix, there are fears Kalonzo and Musalia are headed for their expiry dates in controlling the regions’ votes.

This is coupled with their lack of financial muscle, more so for Kalonzo who has lost key financiers like Muthama and businessman Peter Muthoka.

Omari told the Star Raila and Ruto may look for “someone who comes as a running mate with resources, with a solid constituency and national appeal.

“Musalia and Kalonzo have no resources. They have lost the national appeal. They are irrelevant in terms of the 2022 elections. The person they are clinging to is President Kenyatta who will not be in the race.”

In this regard, he said Interior Cabinet Secretary Fred Matiang’i stands a chance – having built national appeal as a strong, efficient can-do man. So does Peter Kenneth due to his deep pockets.

Prof Olang’ Sana of the Maseno University School of Development and Strategic Studies held that a Raila candidacy would relegate the two regions to second place, bidding for for a running mate slot.

“The two regions have no strong candidates. If Mudavadi runs with Ruto, Kalonzo is likely to be on Raila side. If they work together, they will be relegated to the third position.”

Prof Olang’ said the best bet for the two leaders – and by extension their backyards -is to join either Ruto or the Raila-Uhuru camp.

Even as the politicos position themselves, there are other schools of thought that voting patterns will change drastically.

He said those to the former PM stand no chance of pulling votes to his side, including in Lower Eastern.

Uhuru, Raila Will Be in Deep Trouble if Ruto Makes This Smart Move

Adorable Photos of the First Lady of Kenya - Margaret Kenyatta

List Of Mogul Billionaires That Are Behind Raila's Presidential Bid

"If You Think We Will Bow Down to Your Stupidity, Be Prepared for a War," Senator Tells BBI Task Force

Did you know the face in "Lady Gay" lotion is Gideon Moi's wife, Zahra Moi ?

What You Didn't Know About Pauline Musyoka, Wife To Wiper Leader Kalonzo Musyoka

Ungrateful! After Sharing The 3 Million From Uhuru And Raila Here Is What a Kisii Bodaboda Had To Say