Inside plot to kick out CJ Maraga

JSC to discuss Maraga succession; plans ongoing to advertise CJ position while he is still in office 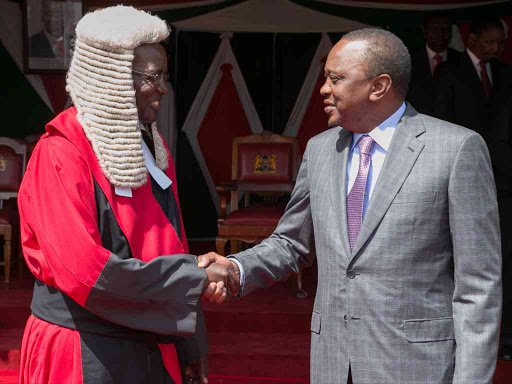 An elaborate plot is afoot within the Judicial Service Commission to force out Chief Justice David Maraga from the helm of the Judiciary before his tenure expires.

The Star has established there have been behind-the-scenes manoeuvres to have Maraga’s job advertised while he is still in office, which is illegal.

Maraga is unwelcome in the corridors of power following his protracted feud with the Executive — and lately MPs — after he recommended the dissolution of Parliament for not implementing the two-thirds gender rule. The full JSC will meet on Friday and discuss Maraga's succession.

Sources who sought anonymity confirmed the meeting, saying it will discuss committee reports, including one on CJ Maraga's office being declared vacant.

It is not known whether the CJ will chair the meeting.

The JSC has different committees, including human resources, administration of justice, finance and audit.

However, under Section 30 of Judicial Service Act, read together with the first schedule, the position of the office of the CJ cannot be advertised until it is vacant.

The position only becomes vacant once the office holder resigns, dies, retires or reaches age 70.

On July 1, Maraga said he will only quit when his term officially ends, and it remains unclear how his critics could get him out of office.

“This is not my last event as CJ. I’ll still be around for a while. I’m not leaving today or tomorrow. You know a retiring judge takes terminal leave. For me that should be around November,” the CJ said.

The CJ is expected to proceed on leave on December 12 until January 12.

Upon the retirement of CJ Maraga, his deputy Philomena Mwilu is set to automatically take over as the acting chief justice, chairperson of the JSC and president of the Supreme Court.

However, Mwilu is also unpopular with powerful forces in government and is also facing disciplinary proceedings before the JSC. She was vocal when the Supreme Court overturned the reelection of President Uhuru Kenyatta, citing illegalities and irregularities.

Mwilu was dramatically arrested in August 2018 and charged with abuse of office, among other offences.

The case was later dropped.

According to the law, once the CJ leaves office, the JSC is allowed to advertise for the position, giving those interested 21 days to apply.

The commission then does shortlisting of those qualified within 14 days.

After the shortlist is made public, a window of seven  days is given to allow members of public to give their opinions on shortlisted candidates.

Thereafter, JSC will conduct an open interview and send the name of the one who emerges top to the president for appointment as the CJ.

Within the legal fraternity some have heaped praise on Maraga while others have described him as one who has been overwhelmed by the size of the office of the CJ.

Maraga has also been described as a man of integrity, partly attributed to his being a devout Seventh-day Adventist.

During his vetting, he swore by the Bible that he had never taken bribes when allegations of corruption were made by a petitioner to the JSC.

In an interview with the Star, lawyer Kethi Kilonzo described Maraga as hardworking and principled, saying his tenure as CJ has been successful - “yet another hallmark in his long and illustrious legal career”.

Lawyer Donald Kipkorir said Maraga’s heart may be in the right place but he is weak, a poor leader, incompetent administratively and in judicial pronunciations.

“His tenure will soon be forgotten as an aberration,” Kipkorir had said.

So angry was Uhuru that he promised to “revisit” the Judiciary if re-elected.

“We shall revisit this thing. We clearly have a problem,” he said, referring to the Judiciary.

Uhuru has since declined to appoint 41 judges, which Maraga has publicly protested, accusing Uhuru of blatant disregard of court orders.

But the AG responded robustly and appeared to suggest Maraga is a failure.

“…the Judiciary has historically, and especially under his leadership, suffered from case backlogs largely caused by internal factors. In recent years, for example, His Excellency the President has had to lament about the failure of Judiciary’s leadership in handling corruption cases, many of which are delayed in the courts,” the AG said.

Only recently, the CJ again angered the Executive and the Legislature when he advised the President to dissolve Parliament over failure to implement two-thirds gender rule.

This caused a backlash from the legislature and produced seven cases challenging his advisory.

The DCJ on Wednesday appointed a five-judge bench to hear the cases.

Cavani Up Front, Pobga on the Bench-See the Best Man United Squad that Will Destroy Chelsea Today

A Man Cannot Satisfy A Woman And Here's Why

Netizens React on an Adorable Lady Pictured With Dp Ruto

A Woman's Powers Are Between Her Legs

Why BBI Threatens the Independence of the Judiciary

Opinion: The Lady Who is Likely to be DP William Ruto's Running Mate

"We Have Gotten To Know What Kind Of Person You Are," Says Muthama (Video)

How to change your ID name legally in kenya