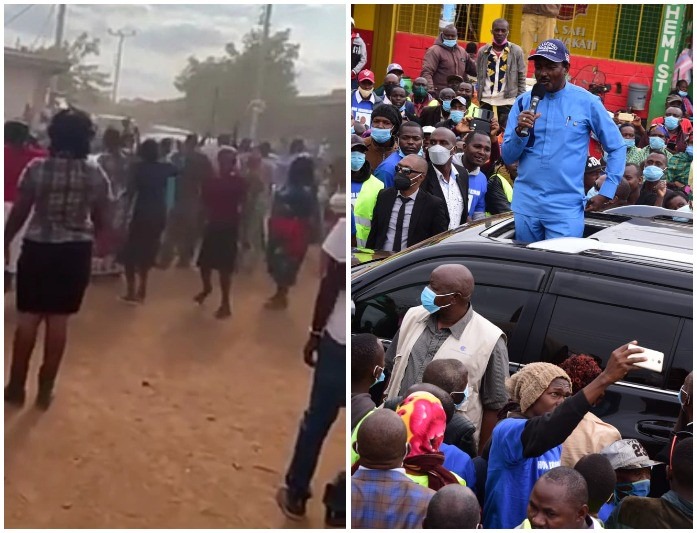 The seat fell vacant after the death of the late Harrison Ngui who died in a road accident early this year plunging the ward into by-election.

Kalonzo, Mudavadi and Wetangula kicked off the campaign for Wiper party candidate Eshio Mwaiwa in Mukuyuni in Kaiti constituency.

The OKA principals were received by a mammoth crowd in Mukuyuni, the same warm reception was accorded to them during their second stopover.

However, things turned ugly in Kikumini area where the three OKA principal met a hostile crowd that didn’t welcome them.

Kalonzo, Mudavadi and Wetangula were chased like thieves in Kikumini by residents who were chanting the name of Timothy Maneno – another candidate in the Nguu/Masumba ward by-election.

The OKA principals were forced to drive off without holding a rally in Kikumini as their convoy was pelted with stone by the angry residents.

The heated crowd stoned OKA’s motorcade as they filled the air with the name of governor Kibwana’s candidate Timothy Maneno who is vying on independent ticket.

Nguu/Masumba ward by-election is turning out to be supremacy battle between Kalonzo and Makueni governor Kibwana in Ukambani politics.

Kalonzo’s bid to cement his status as Ukambani supreme kingpin is facing serious challenge from the regions three governors who are keen to share the spoils with him.

Makueni governor Kibwana and his Machakos counterpart Alfred Mutua have both declared interest to vie for president as they are on their last leg of their term in office.