DP told his allies that he feels betrayed by Uhuru over the BBI deal but crossing his boss could ruin him. 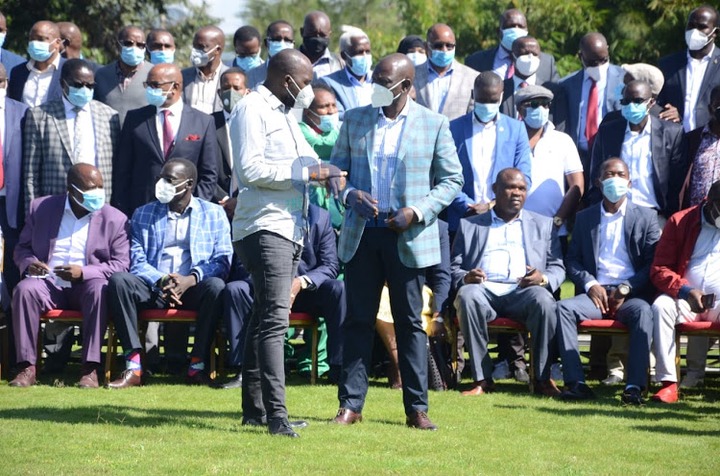 Details have emerged of Deputy President William Ruto's closed-door meeting with allies during which he poured out his heart over the looming Building Bridges referendum.

During the five-hour crunch talks at his Karen residence, Ruto narrated to his troops the genesis of the BBI and said he feels betrayed after what he claimed are the changes in the initiative's original objectives.

But in a tactical move, the DP deflected a strong push from a majority of his lieutenants to lead a No referendum campaign. He reminded them they were still in the same government led by President Uhuru Kenyatta.

"There were many hardliners who wanted him [Ruto] to announce to the nation he would lead a No campaign," a senator who attended the meeting told the Star.

The DP reportedly admitted that while Uhuru kept him abreast of the BBI process, things went haywire when the process morphed into a constitutional amendment.

Ruto said he had a deal with the President that BBI was not about creating a coalition government or amending the supreme law of the land.

But he admitted he was involved in the appointment of some of the 14-member BBI team because, he said, he understood it to be primarily about uniting the country and bringing peace.

He said had he been made aware that the BBI process was about constitutional review, he would have seconded constitutional experts and not elders to the task force.

Despite his disappointment, Ruto tried to convince his troops to be ready to back the BBI process.

He said it would be difficult to mount a political war against his boss as that could dash his chances of becoming President.

"A lot of progress has already been made on the document because of  the firm position I and you took. There is still room where we can have a non-contested referendum if we iron out some of the outstanding issues," Ruto was quoted by MPs as saying.

This position sharply contrasts with the bravado that Ruto and his troops later displayed at a press conference. They made tough, practically unmeetable demands - including having the referendum and the 2022 General Election held on the same day.

They spoke of five "irreducible minimums".

The Tangatanga brigade declared on Wednesday the referendum push is a waste of public resources amid a pandemic and a struggling economy on the "verge of full-scale collapse".

DP Ruto told his troops, however, that although he felt shortchanged it was critical to supports his boss' agenda to avoid a direct confrontation that could ruin his political fortunes.

Ruto, former National Assembly Majority leader Aden Duale and Turkana Governor Josphat Nanok are said to have tried hard to change the minds of Tangatanga  members who wanted a No campaign.

Ruto told the meeting that he wasn't ready to campaign against the referendum backed by his boss, saying that would polarise the country and give his rivals political momentum ahead of the 2022 polls.

On Thursday, Duale told the Star he informed his colleagues that given that much progress had been made on the initial Bomas 2 document, it was necessary to build consensus on the remaining contested issues.

“What needs to be agreed on is how Wajir South, Ijara, Nyeri and Nyandarua and Migori can get extra constituencies so that we don't go into a contested referendum that will take Kenya back to the 2007 post-election violence,” Duale said.

The revelations on the behind-the-scenes intrigues that played out during the crucial meeting with his foot soldiers signal Ruto's ultimate game plan to finally back the BBI push.

During the meeting, some DP allies pressured him to stay true to his course of opposing the BBI referendum so he would not be seen as betraying his supporters.

The biggest resistance came from Ruto's allies from Central Kenya who argued that the ground was already hostile to the BBI report.

Kandara MP Alice Wahome and Kiharu MP Ndindi Nyoro - Ruto's key foot soldiers in Muranga county - are said to have been the most vocal, they warned the DP he risked losing the support he has built in the region if he backs BBI.

“So, when we beat this retreat, what do we tell our people, how do we go back after all these dirt we have been forced to go through to tell them that now support the BBI?” a furious Wahome is reported to have asked Ruto.

“Alice was emphatic that we can't support the BBI referendum given the dirt we have gone through and those who support the DP insisted on No,” another MP who attended the session said.

Details gleaned from leaders at the DP's BBI strategy meeting indicate Ruto's allies at one point threatened to walk away and lead the No campaign if he had chickened out.

“In fact, it was an MP from Central Kenya who threatened to walk out and lead the No campaign, insisting that the ground is against the BBI referendum,” another MP said.

However, when contacted, Mathira MP Rigathi Gachagua, who is said to have also taken a firm No position, told the Star the meeting offered a platform for leaders to discuss the pros and cons of the BBI process.

“I don't think anybody took a very strong position. We were just discussing issues. In fact we had a very productive and fruitful meeting,” Gachagua said.

Nyoro told the Star that the meeting deliberated on all that was on the table.

“What was supposed to be discussed was discussed there and I have nothing else to add,” Nyoro said.

Ruto explained why a BBI red card was not a viable option.

“The DP looked like a betrayer and you could see it from the faces, especially leaders from Mt Kenya who felt he had thrown them under the bus,” an MP who attended confided to the Star.

Service Party leader Mwangi Kiunjiri reportedly told the lawmakers that a No campaign would be disastrous for the DP's political strategy ahead of 2022..

Kiunjuri argued that pushing to postpone the referendum to the 2022 General Election would not be a strategic political move as the DP's camp may end up being a beneficiary of the proposed law change.

“The best way forward is to push for the issues we have to be incorporated in the BBI Bill so that the referendum can be held as planned because we know there are timelines already out there,” Kinjuri said. He spoke a couple of times.

Nandi Senator Samson Cherargei told the Star the meeting was a cordial conversation and members were listened to.

"But, of course, some of us held the view that to bring different and extreme positions to agree, you have to build consensus by listening to everybody. You know, people were used to [meetings] where they were being dressed down. But our meeting was an open discussion,"Cherargei said

Laikipia Senator John Kinyua said that members had different views on the BBI report and the Constitution of Kenya (Amendment) Bill, 2020.

“During discussion, people talked on different issues. Members had different positions. For example, if one comes from Nyeri and there, we have constituencies like Kieni and Mathira which are big but they have not been split, would you expect such a person to support that proposal?” he asked.

“So it was those kinds of discussions that we had. It is natural in any discussion that people talk this way and that way. But the most important thing is that after all that push and pull, we made a decision and the statement was issued. Even in the Senate, we disagree and later agree,” he said.