Why 80 KCSE Candidates Walked Out of School 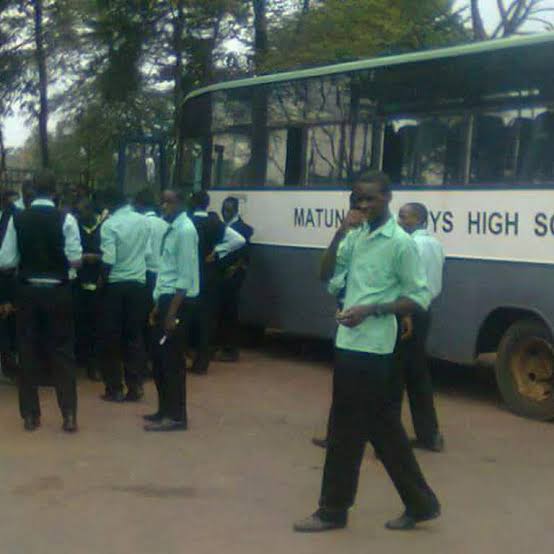 Matungulu Boys High School were shocked on Wednesday evening after 80 students who are form four candidates walked out of school claiming they are tired of learning. They did not riot or cause any destruction in school.

They also claimed that the school administration is denying them their rights and they prefer sitting at home and just go back to school to do the final examination.

On Thursday morning, the principal Joseph Makau told the standard digital that, the action of the students is a gross misconduct and they will not entertain it. As most of the students want a free lifestyle. He has already notified the parents of those students. 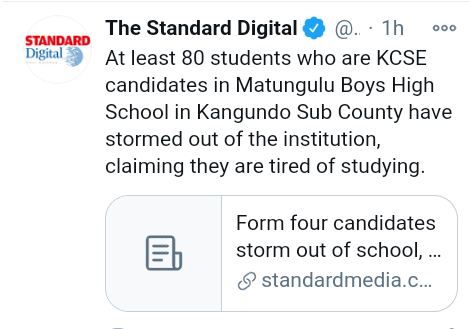 Before the nationwide closure of schools due to the Covid-19 outbreak, a number of students were on counselling due to the use of hard drugs" School Principal stated.

Content created and supplied by Salukesh.Opera News is a free to use platform and the views and opinions expressed herein are solely those of the author and do not represent, reflect or express the views of Opera News. Any/all written content and images displayed are provided by the blogger/author, appear herein as submitted by the blogger/author and are unedited by Opera News. Opera News does not consent to nor does it condone the posting of any content that violates the rights (including the copyrights) of any third party, nor content that may malign, inter alia, any religion, ethnic group, organization, gender, company, or individual. Opera News furthermore does not condone the use of our platform for the purposes encouraging/endorsing hate speech, violation of human rights and/or utterances of a defamatory nature. If the content contained herein violates any of your rights, including those of copyright, and/or violates any the above mentioned factors, you are requested to immediately notify us using via the following email address [email protected] and/or report the article using the available reporting functionality built into our Platform. Read more>>