What You Didn't Know About Pauline Musyoka, Wife To Wiper Leader Kalonzo Musyoka 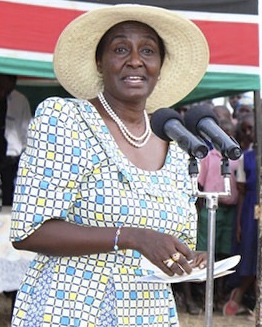 View pictures in App save up to 80% data. Pauline Musyoka is a woman without limit and a person determined to achieve success not just for herself but also her family. She is the wife to Wiper leader Kalonzo Musyoka.

Just like Kalonzo, Pauline is one cool woman only focused in strengthening her family and supporting them as their mother. She is mother to Kennedy Kalonzo, Klein, Damarie Musenya and one other child who has maintained a low profile as nothing about her/him is in the public domain.

Pauline children have been largely successful due to her efforts to ensure they are disciplined and focused to their academics and positive things in life. Kennedy is a legislator at EALA, Klein a musician and a top rising rapper while Musenya has concentrated in matters activism.

Damarie Musenya is also rumoured to be working in central Bank of Kenya where Pauline her mum works as a senior officer in the finance department. She has earned most of her experience at the regulator bank that really is the heart of Kenya. This is a clear indication that she is one very hardworking woman with brains.

Pauline is one person who believes in privacy unlike her husband who is a public figure out there squaring out with other politicians. Kalonzo is looking forward to succeed president Kenyatta in 2022 but faces heavy storms to move through to presidency as Raila and Ruto are also keen to take over from Uhuru Kenyatta.

Pauline believes in togetherness something that Kalonzo as emulated from her as he is in the forefront uniting warring factions as well as one of the special envoy's who have been successful in bringing Sudan to it's foot after several years of infighting. It's something that has kept their family united and strong only focused in success. Those who know Pauline's children have attested that they are the most humble of all.

Pauline has however been battling an unknown and undisclosed sickness that is only known by the family. Kalonzo spent most part of 2018 attending to his wife at the hospital. She however came back to Kenya but it's not in the public domain whether she recovered or not. However we wish her quick recovery and a successful future full of joy and God's blessings.

Content created and supplied by onegirlshow.Opera News is a free to use platform and the views and opinions expressed herein are solely those of the author and do not represent, reflect or express the views of Opera News. Any/all written content and images displayed are provided by the blogger/author, appear herein as submitted by the blogger/author and are unedited by Opera News. Opera News does not consent to nor does it condone the posting of any content that violates the rights (including the copyrights) of any third party, nor content that may malign, inter alia, any religion, ethnic group, organization, gender, company, or individual. Opera News furthermore does not condone the use of our platform for the purposes encouraging/endorsing hate speech, violation of human rights and/or utterances of a defamatory nature. If the content contained herein violates any of your rights, including those of copyright, and/or violates any the above mentioned factors, you are requested to immediately notify us using via the following email address [email protected] and/or report the article using the available reporting functionality built into our Platform. Read more>>