On the list of the top military spenders in the world, it’s a fairly well-known fact the U.S. spends as much on its military as the next five countries on said list, combined. Which is fine by the military, because golf courses, and flat screen TVs (and if you’re in the Marines, a barracks next to a river of sh-t) don’t come cheap.

The Costa Ricans have to be at the bottom of the list, as they have no armed forces to speak of. What they do have is an Army of wealthy Westerners who come to teach Yoga to other Westerners visiting Costa Rica. But no one will ever want to invade Costa Rica because these people will have to come with it. Other countries without a military force include Iceland, Mauritius, Monaco, Panama, and Vanuatu, all without the significant number of would-be yogis. Can you imagine a world without military service?

What may have been the 4th largest army in the world under Saddam Hussein is now a shadow of its former self. Despite years of training from U.S. and British forces, as well as $26 billion in investments and military aid, the Iraqi Army has only 26 units considered “loyal.” On top of that, Iraqi lawmakers discovered 50,000 “ghost soldiers” in its ranks — troops who received a paycheck, but never showed up for work. In 2014, ISIS was able to overrun much of Western Iraq as Iraqi troops fled before the Islamist onslaught. 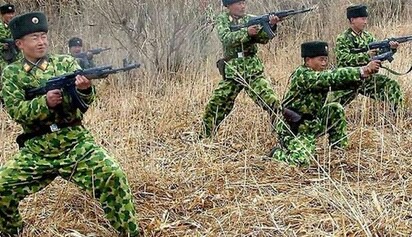 On the outside, the North Korean Army looks like it's the priority for the Kim regime. In many ways, it is. The border towns of Panmunjom and Kaesong, as well as Nampo (where a series of critical infrastructure dams make a concerted military effort necessary) and DPRK newsreel footage boast tall, strong-looking North Korean troops with new equipment, weapons, jeeps, and full meals. Deeper inside the Hermit Kingdom, however, the Army starts to look a bit thin. Literally. On a 2012 trip to North Korea, the author found most Korean People’s Army (KPA) troops to be weak and used mainly for conscripted labor. It would have been a real surprise if they all had shoes or could walk in a real formation. Most units appeared lightly armed, if armed at all.

A country is obviously great when it’s known as “Africa’s North Korea” in international relations circles. Eritrea’s armed forces has one of the highest concentrations of conscripted men of any army in the world, which it uses more for forced labor than to secure its borders or fight al-Shabab terrorists. This is the country so great that 2,000 people a month seek asylum in Sudan. Sudan is supposed to be an improvement. SUDAN.

Nigeria is struggling with an ISIS-affiliated insurgency from Boko Haram (of “Bring Back Our Girls” fame). Despite Nigeria’s oil wealth (the Nigerian oil industry is the largest on the continent), its military is ill-equipped to combat this Islamist uprising. One soldier described it to BBC as:

“Imagine me and you are fighting, we both have guns but while you are wearing a bullet proof vest, I’m carrying an umbrella.”

Soldiers in the country’s Northeastern Borno State are so underequipped, their armored vehicles don’t actually move. Some soldiers are known to flee with civilians as they tear off their uniforms.

The Tajik Army is a mess. Unlike other Soviet states after the fall of the Soviet Union, Tajikistan had no native units to absorb into its new independent government. The Tajik military was not built around old Soviet units. The Tajiks were left defenseless with only a Russian peacekeeping force. In 1994, they formed their own Army, which immediately resulted in a Civil War. Just what one might expect from a country whose capital is named “Monday.” Tajiks prefer the Russian Army because the pay is better. Those who are drafted are often kidnapped and then sometimes hazed to death.

Oh how the mighty have fallen. As a landlocked country, the Mongols have no Navy or need of one. Unfortunately they’re also locked between Russia and China and could not possibly defend themselves from either. In fact, if a Russian-Chinese war ever broke out, part of it would likely be fought in Mongolia. The Mongols have sent forces to assist the U.S. in Iraq and Afghanistan, but their expertise is in teaching U.S. troops how to recognize and use (if necessary) old Soviet-built arms and equipment.

The Saudis are currently engaged in a coalition military operation in Yemen with the United Arab Emirates (UAE) in an effort to expel Houthi tribesmen from Sana’a and re-establish the Sunni rulers. And they can’t. The Saudis and Emiratis have naval and air superiority, superior training, material, and numbers on the ground, and the backing of U.S. intelligence assets. They’ve been there since March 2015 and the Houthis are still in the capital.

“In fact, talk to any coalition troops on the ground and they will tell you the Afghans can fight, but only after they have been fed, clothed, armed and delivered to the battlefield by NATO.”