A Family is currently mourning the death of two or their relatives who sadly died in a grisly accident while attending their sons graduation. Speaking to the affected member of the family, it has been reported that the two brothers were attending one of their son's graduation in a university in Eldoret before they were hit by an unknown vehicles which claimed the lives of the two on the spot.

According to the reports given by the witnesses or rather locals who saw the accident happen, it was reported that the Lorry caused the accident after trying to overtake a vehicle while on a blind spot, this brought about a deadly Head-On Collision where out of 4 dead passengers were two brothers. 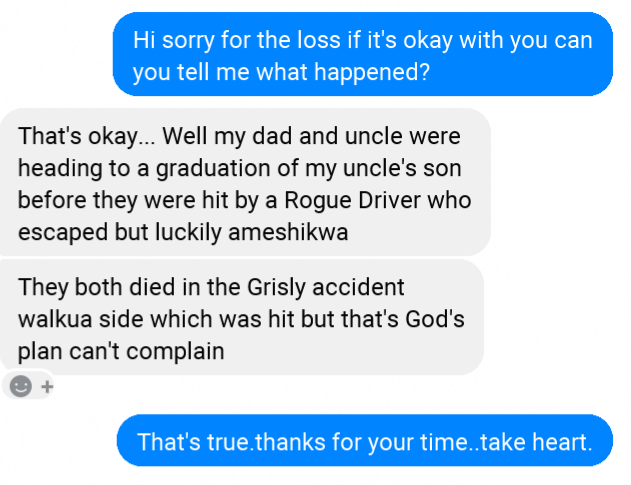 This has Sparked alot of mixed reactions from Kenyans who seemed to have been confused on why drivers weren't following the traffic rules and regulations and so with different contradicting opinions and suggestions, below are some of the reactions given by Kenyans towards the post. This is happening at the same time when the country is continously recording the highest number of accident related deaths in the past few months most of which are blamed on reckless drivers and motorists. Due to this reason, the National Transport and Safety Authority (NTSA) has reintroduced Alco-blow in order reduce the number of accidents on kenyan roads.

If you liked this article please make sure you share your thoughts and opinions on this story in the comments section below not forgetting to share it with your friends too for awareness and security reasons.

Content created and supplied by TheProffessorr.Opera News is a free to use platform and the views and opinions expressed herein are solely those of the author and do not represent, reflect or express the views of Opera News. Any/all written content and images displayed are provided by the blogger/author, appear herein as submitted by the blogger/author and are unedited by Opera News. Opera News does not consent to nor does it condone the posting of any content that violates the rights (including the copyrights) of any third party, nor content that may malign, inter alia, any religion, ethnic group, organization, gender, company, or individual. Opera News furthermore does not condone the use of our platform for the purposes encouraging/endorsing hate speech, violation of human rights and/or utterances of a defamatory nature. If the content contained herein violates any of your rights, including those of copyright, and/or violates any the above mentioned factors, you are requested to immediately notify us using via the following email address [email protected] and/or report the article using the available reporting functionality built into our Platform. Read more>>