Sakaja Comes Out Guns Blazing Following the Arrest of Sonko 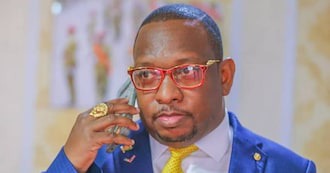 Sonko who has since been released was arrested on Monday when he was holding a meeting with a section of Nairobi Members of the County Assembly ahead of his impending impeachment.

The Sonko impeachment motion is expected to be tabled in the County Assembly with over 80 MCAs already having signed a petition to send the embattled Governor packing.

But while criticizing the arrest of Sonko, Sakaja said that the move amounts to the use of police for intimidation.

According to "Super Senator Sakaja", whereas people may not agree with Sonko politically, it is very bad to use the security apparatus to intimidate him.

" Arresting Mike Sonko for meeting with MCAs in the week of his impending impeachment is nothing short of using the police for politics and intimidation. Just as it happened in the Senate, this must be condemned whether you support the Governor or not. Let's not claw back on democracy using Covid19 as an excuse," Sakaja said in a Facebook post.

It is reported that the MCAs fresh bid to send Sonko home has the blessings of President Uhuru Kenyatta who has fallen out with the Governor over his never-ending leadership wars with Nairobi Metropolitan Services Director Mohamed Badi.

The beleaguered has insisted that he does not fear going home, saying that there is always life after politics.

Content created and supplied by FrankMurunga.Opera News is a free to use platform and the views and opinions expressed herein are solely those of the author and do not represent, reflect or express the views of Opera News. Any/all written content and images displayed are provided by the blogger/author, appear herein as submitted by the blogger/author and are unedited by Opera News. Opera News does not consent to nor does it condone the posting of any content that violates the rights (including the copyrights) of any third party, nor content that may malign, inter alia, any religion, ethnic group, organization, gender, company, or individual. Opera News furthermore does not condone the use of our platform for the purposes encouraging/endorsing hate speech, violation of human rights and/or utterances of a defamatory nature. If the content contained herein violates any of your rights, including those of copyright, and/or violates any the above mentioned factors, you are requested to immediately notify us using via the following email address [email protected] and/or report the article using the available reporting functionality built into our Platform. Read more>>