One night stand causes drama in a marriage. 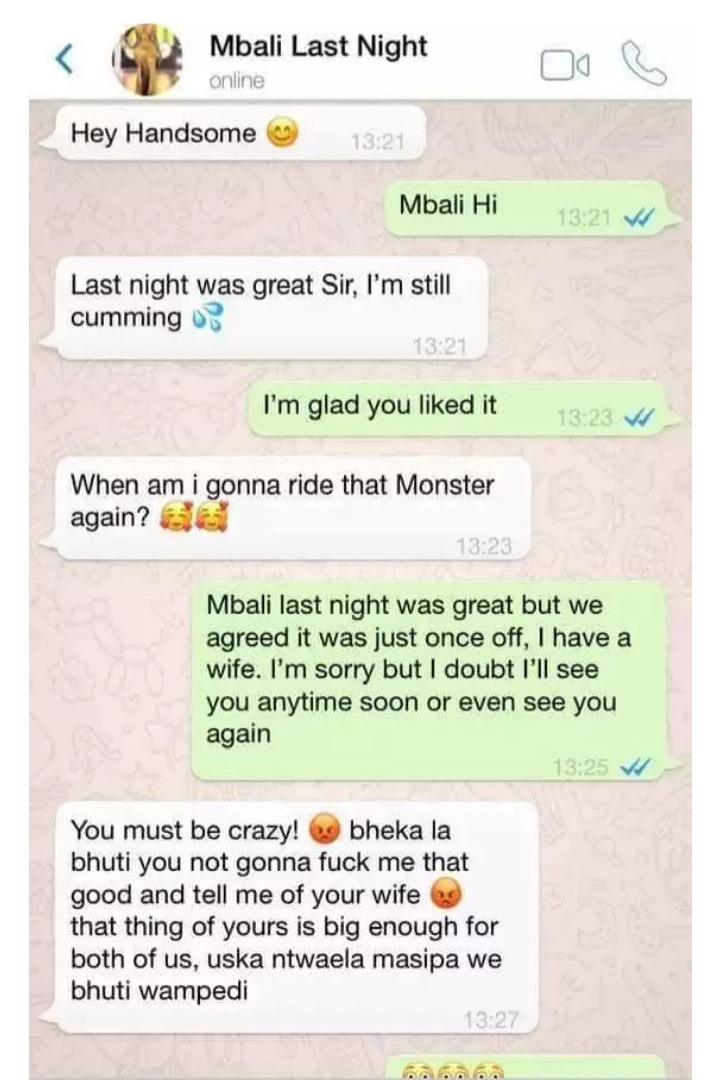 View pictures in App save up to 80% data. Cheating is a dangerous game especially if you are married. Girls don't just date a man who is married for fun, they are also looking for marriage. And they will try by all means to destroy your marriage, until such time that it collapses. Even if you don't marry them, they will be happy that they destroyed you. They just seek revenge, nothing more. A guy cheated on his wife and told his side chick that it was just a once off thing but the girl didn't take it. The girls called Mbali demands more of the guy, and she doesn't wanna play games with the guy. The guy is trying to make it clear that he doesn't think they will even see each other again but Mbali doesn't seem to care, she wants to have the man for good. This is exactly what happens when you try to play a one night stand. No girl wants to be a once off thing, most of them they need more. If the wife finds out, it's gonna be a problem, now he will loose his wife's trust for good and later causes multiple never ending fights in his marriage. Some women will even leave once they discover that the husband is cheating. But let's just hope this doesn't get to that point, where the wife finds out.

Content created and supplied by Matshidisop.Opera News is a free to use platform and the views and opinions expressed herein are solely those of the author and do not represent, reflect or express the views of Opera News. Any/all written content and images displayed are provided by the blogger/author, appear herein as submitted by the blogger/author and are unedited by Opera News. Opera News does not consent to nor does it condone the posting of any content that violates the rights (including the copyrights) of any third party, nor content that may malign, inter alia, any religion, ethnic group, organization, gender, company, or individual. Opera News furthermore does not condone the use of our platform for the purposes encouraging/endorsing hate speech, violation of human rights and/or utterances of a defamatory nature. If the content contained herein violates any of your rights, including those of copyright, and/or violates any the above mentioned factors, you are requested to immediately notify us using via the following email address [email protected] and/or report the article using the available reporting functionality built into our Platform. Read more>>