Oh, the lies they tell about voter ID 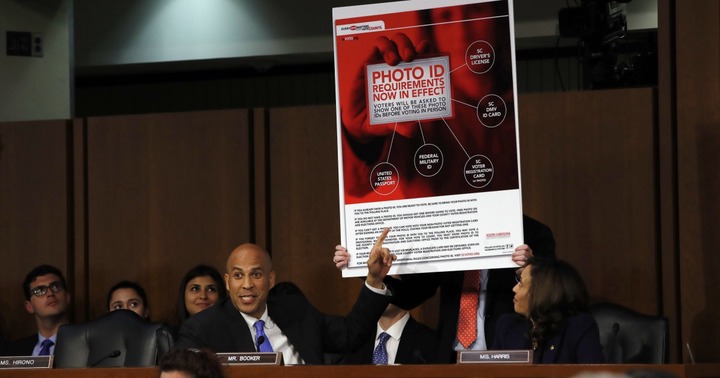 Screaming opponents of voter ID laws, who argue that such a commonsense measure suppresses the vote or is even racist, are terrible liars. The best lies, after all, have to be remotely credible, and theirs are not.

This is the most important conclusion to draw from a new and illuminating study from the National Bureau of Economic Research. Researchers Mark Hoekstra and Vijetha Koppa looked at more than 2,000 election races in Florida and Michigan. In those two states, where voters are asked for an ID at the polls but can still vote without it, the study found what common sense would suggest: that nearly everyone has and brings an ID when they go to vote, even in places where it isn’t strictly necessary.

“The law affects so few people,” the authors write, “that at most only 0.10% and 0.31% of total votes cast in each state were cast without IDs.”

This demonstrates two things. First, as most proponents of voter IDs have acknowledged all along, there aren’t millions of fake votes being cast in elections. The point of enacting voter ID laws is not that our system is hopelessly compromised, but rather that it is needlessly vulnerable. As with measures to combat Russian interference in our elections, voter ID and similar election integrity reforms will not change election outcomes. But such reforms will bolster faith in the existing truth that we elect our political leaders democratically.

Second, the study makes clear the monstrous lies that left-wing groups have been telling about identification in general and the effects of voter IDs in particular. They claimed in court filings, no less, that as many as a million Hoosiers who are eligible to vote lack any form of legal identification. Last decade, the Brennan Center for Justice made the ludicrous claim that as many as 11% of all voting-age citizens — that’s tens of millions of adults, not including resident immigrants, legal or illegal — lack a photo ID.

The reminder provided by the new study is helpful, but the Brennan Center's falsehoods were never remotely credible. One can hardly get by for a single day without showing an ID. Never mind buying beer or cigarettes, you cannot rent or buy a home without proof of identity. Most employers will not hire you without one. You cannot cash a check without providing evidence of who you are. You may not be able to apply for welfare or housing benefits. You cannot board a plane, enroll in school, or enter most private or government office buildings without a valid ID. And, of course, you cannot drive a car.

So, where are all the caves in which these tens of millions of unemployable lawful U.S. citizens live, unable to travel except by foot, bicycle, or rowboat, and who live without the possibility of gaining relief from their travails with the purchase in a bar of a shot and a beer?

In Georgia and Indiana, two of the early-adopting states, voter ID demonstrably failed to depress turnout in general or non-white turnout in particular. In fact, both states saw African American turnout skyrocket in 2008 under those states’ new ID rules. Yes, that was Barack Obama’s first election, but it still serves as proof that those who wanted to vote are not prevented from doing so merely because proof of identity is made a prerequisite. Shocking as it may be, Democrats will have to accept that low turnout for their less-inspiring candidates is a matter of voters’ lack of interest in dreary politicians, not the result of sinister suppression.

In 2018, Georgia saw its biggest turnout ever in a midterm election, with voters showing up at almost presidential-year levels. Setting aside the conspiratorial delusions of Stacey Abrams, who thinks of herself as the true governor in exile, suppressors of the vote appear to have failed miserably in her state.

One reason those states’ laws survived court challenges was that the ACLU and other liberal groups suing to block them failed to find even a single eligible voter who would be unable to vote as a result of the laws. “Plaintiffs have been unable to uncover anyone who can attest to the fact that he/she will be prevented from voting despite the concerted efforts of the [Democratic] party and numerous interested groups who arguably represent the most severely affected candidates and communities,” wrote the federal judge in the Indiana case. The Georgia judge made exactly the same point.

With voter ID on the books in so many states today, we’d also expect a lot more anecdotal evidence if so many people had been rendered unable to vote. When national elections end, you simply don’t hear millions, thousands, or even hundreds of stories from voters who never got to vote for lack of ID. Journalists may track down, as they did in Wisconsin after the 2016 election, a handful of people who forgot their driver's licenses or had allowed them to expire or kept driving illegally for a year or more on an out-of-state license after moving. That last one is a good way to get your car impounded, not a good way to make a case that one's civil rights are being denied. Even most of those in such extremely rare situations were able to cast provisional ballots.

Voting is too important to leave to the honor system. Negligence degrades faith in elections. It gives rise to anxieties both founded (what if my vote is canceled out by someone impersonating absent family members or double-registered from a vacant lot?) and unfounded (“millions of people who voted illegally”).

As with measures to combat mostly symbolic threats from Russia, voter ID puts real and exaggerated fears to rest while hurting no one, as this study confirms.