Meet Josephine Thitu, Beautiful Ex Wife To Machakos Governor Alfred Mutua And Why She Devorced Him 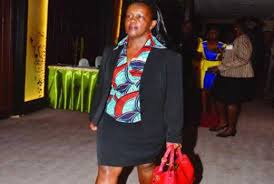 View pictures in App save up to 80% data. Josephine Thitu is ex wife to Machakos governor Alfred Mutua. She is also a mother of three and a woman determined and focused in what she believes in and strives hard to work towards achieving it.

Josephine Thitu and Alfred Mutua married way back in year 2000 in a marriage that had high expectations as they both looked at the future and wanted to work in achieving the best out if it. Little did they know they would involve themselves in a messy devorce 15 years later.

Josephine Thitu and Alfred Mutua Devorced in the year 2015 in a much publicised devorce that happened in Australia with Mutua accusing his wife of escaping with children without his knowledge. It's something that Josephine countered heavily informing the court that the father of her children clearly knew about her moving to Australia.

At the centre of their devorce was also properties as Josephine wanted Alfred Mutua to be compelled by court into giving her as well her children some estates and properties. It's a case she won with Alfredo túlh Mutua loosing heavily first on the custody of children as well properties.

Mutua however went ahead to marry Lillian Ng'ang'a a woman she had met in the year 2011 who is his wife todate as well the Machakos county government first Lady. Their marriage has however not been blessed with children though they have married for quite sometime now. It's however their choice or just by circumstance as one cannot judge them based on their decisions that we are ignorant about.

Josephine has however concentrated in taking care of her family as well keeping her private life off public radar. Nothing about her is in the public domain since devorcing Alfred Mutua for what she termed as irreconcilable differences. She had also accused Mutua of being unfaithful owing he had a relationship outside marriage since 2011. It's also not in the public domain whether she is married or not as she lives in Australia and rarely posts her life in public.

Content created and supplied by Nyandu.Opera News is a free to use platform and the views and opinions expressed herein are solely those of the author and do not represent, reflect or express the views of Opera News. Any/all written content and images displayed are provided by the blogger/author, appear herein as submitted by the blogger/author and are unedited by Opera News. Opera News does not consent to nor does it condone the posting of any content that violates the rights (including the copyrights) of any third party, nor content that may malign, inter alia, any religion, ethnic group, organization, gender, company, or individual. Opera News furthermore does not condone the use of our platform for the purposes encouraging/endorsing hate speech, violation of human rights and/or utterances of a defamatory nature. If the content contained herein violates any of your rights, including those of copyright, and/or violates any the above mentioned factors, you are requested to immediately notify us using via the following email address [email protected] and/or report the article using the available reporting functionality built into our Platform. Read more>>